By Lilian (self media writer) | 4 months ago 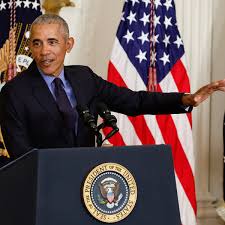 With his speech at the White House, former US president Barack Obama entertained the audience and reminded the world of his friendship with the current president, Joe Biden, among other things.

Obama, who had come to the White House to commemorate one of his most significant accomplishments, the Affordable Care Act, had prepared a couple of jokes for the occasion.

After praising Biden, he made a lighthearted joke about him being the vice president, which caused a roar of applause from the assembled audience.

After that, Biden saluted him, and Obama walked away from his podium and went over to greet him before returning to his seat to resume his address.

"That was a joke, of course. That had been planned out in advance "He went on to say more.

Here is a video

Obama also poked light of the changes that have taken place in the oval office since he was last there in 2009, when Donald Trump was the 45th president of the United States.

He remarked that there were animals in the area, such as cats, and continued to joke that his dogs, Bo and Sunny, would have been less than thrilled with the notion.

His arrival in the White House was met with laughter on social media, with some people remarking that they had missed seeing him in action.