By Breakingkenya (self media writer) | 11 months ago 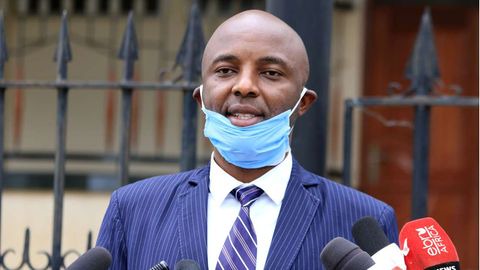 Muranga County Senator Hon Irungu Kanata has said goodbye to the Jubilee Party. Addressing journalists outside the KICC, Hon Kangata has finally thanked President Uhuru Kenyatta and his team who have found it better to install discipline in him, through the impeachment motion.

Sen. Irungu Kang’ata: All senators who have spoken in that meeting have supported me. We should not use BBI to divide our people. I am now noticing that this problem seems to have started after the handshake, now imagine the guy of handshake becoming the president of this country. I will give my official political stand next week.

Kangata has also reported that Things country belongs to every Kenyan, and they won't allow the Building Bridges Initiative to be used as a tool to divide the nation. He has also reported that next week, he will announce his official political stand ahead of the upcoming 2022 general election, hinting at leaving the Ruling Jubilee Party to Join the TangaTanga battalion.

Rallying behind him, Murkomen has welcomed Kangata to the Ruto's camp saying that, "We will accommodate Isaac Mwaura & Sen. Kang’ata. We will stand with Sen. Kang’ata & evidence be tabled including numbers & signatures that signed his removal. Sen. Kang’ata remains the Majority whip in the senate. The people running Govt are now the minority.