Divided IEBC: 4 Reasons Why The Four Commissioners Are Disputing The Presidential Results

By @Caromdaku (self media writer) | 1 month ago

Following yesterday announcement by IEBC chair Wafula chebukati that William Samoei Ruto had won the 2022 general election, four IEBC commissioners distanced themselves from the results saying that we are a opaque.

They wherefore promised to address the press and give their reasons, which they have stated as below: 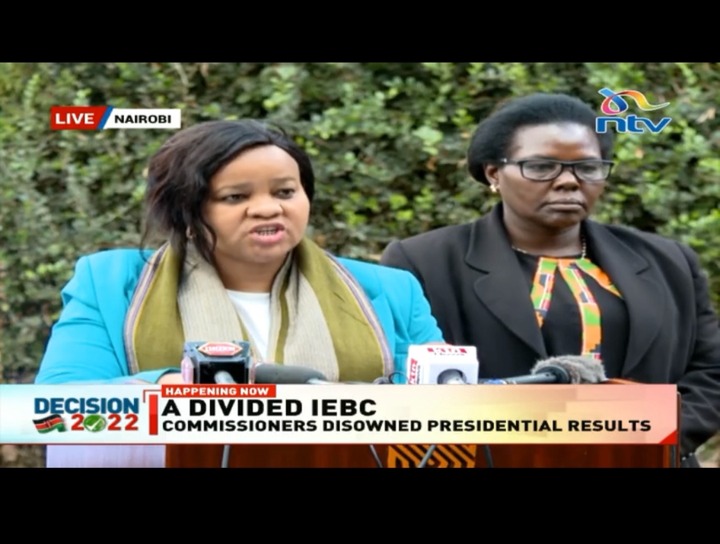 Waihiga 0.27% and Wajackoyah 0.44%. The 0.01% translates to approximately 142, 000 votes which would make a huge significant difference in the final Results.

2. They have also argued that contrary to the constitution and legislation, the results declared and announced did not indicate that a total number of registered voters, the total number of votes cast and the number of rejected votes if there were any.

3. According to the four commissioners, chebukati must show how the winner he announced and the runners up got a total of 25%in 39 counties for Raila Odinga and 25% in 34 counties for William Ruto, but figures. Now that chebukati cannot prove the above, they have said that the whole process that led to the generation of form 34c that he used to declare the 2022 presidential results, was opaque and incapable of owning their ownership and confidence.

4. They have further said that they were not given a chance the process the results before they are declared and announced by the chairperson. There results might therefore be rendered as unconstitutional as the seven commissioners did not approve them, making the results his own and not that of IEBC.

5. Finally, they have said that by the time the results are being announced, results from some constituencies had not been announced.

Content created and supplied by: @Caromdaku (via Opera News )