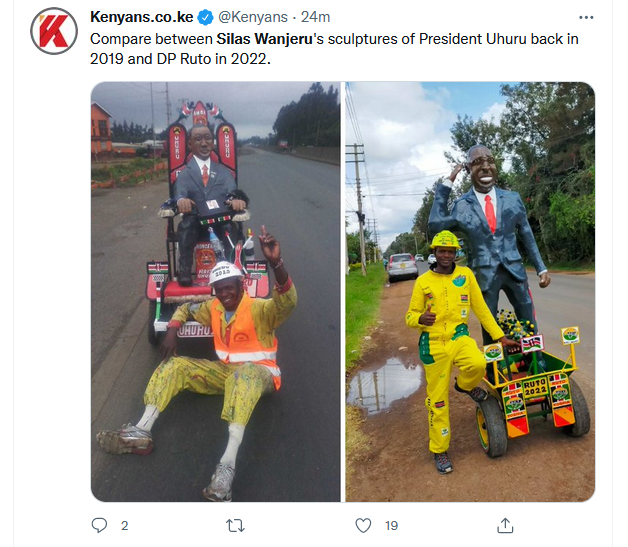 Most Kenyans are considered to be humorous by nature, and have been seen performing the most embarrassing antics in support of their favorite candidates, particularly during the campaigning period, all in the hopes of gaining attention and reaping large sums of money. They perform the most outrageous acts in order to gain and attract an audience, and some even achieve celebrity status as a result of their efforts.

Silas Wanjeru, the sculptor who hauled a wheelbarrow from Nakuru to Karen to present Deputy President William Ruto with a gift, has maintained his resolve to see him.

The artist, who considers himself a Ruto aficionado, stated on May 29 that he traveled for five days and arrived in Nairobi on Tuesday, May 24.

He's been stranded in Karen ever since, and he's determined to meet his idol before returning home. He sees his contribution as an additional campaign effort for the presidential candidate as a supporter. "I was stopped at the gate, but that's to be expected due to security officers unless an order is given." As William Ruto's ambassador from Nakuru, I am focused on peace. 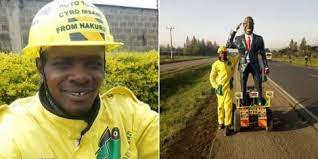 "As an artist, I'd like the DP to recognize the worth of my work and see if he can support me so that I can help other Kenyans who want to end poverty. Because we have demonstrated our abilities, I would like the DP to hold my hand as an artist "he explained.

Wanjeru, also known as Silas Msanii, said on Sunday that the DP's office had contacted him and promised to set up a meeting whenever Ruto returned to Nairobi. The team, on the other hand, stated that it had no idea when the DP would be in town.

"The (Ruto team) has already approached me and informed me that as soon as he lands in Nairobi, they will develop a plan for me." It was the DP's office on the other end of the line. They've seen me, and I've been here for days," he added.

Wanjeru has faced various problems during his five days in Karen, the most pressing of which being finding shelter and food. 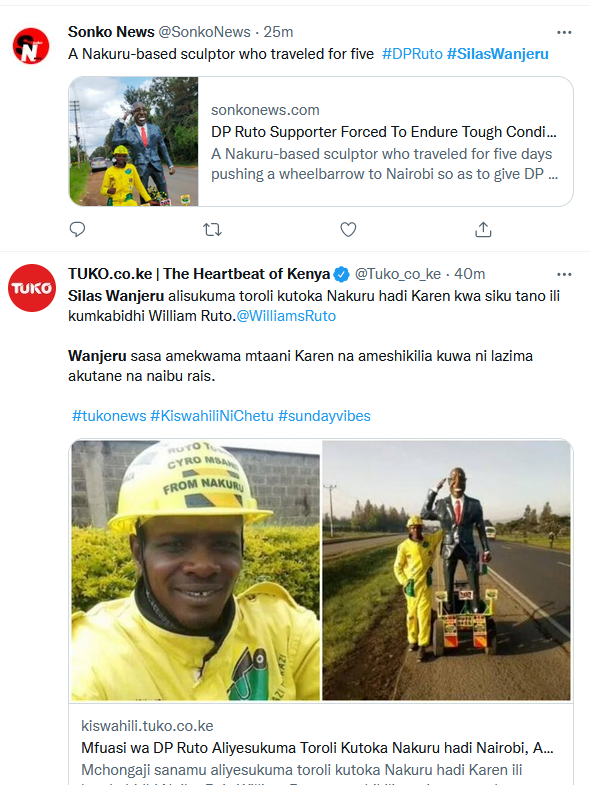 He has had to deal with harsh weather and inconsistent meals, but he stays grateful to his neighbors in the area.

"I presented President Uhuru Kenyatta with the sculpture, which I rode for another five days." Uhuru's government has also allowed me to appreciate the DP. In 2019, I was welcomed by the President's Office. I was warmly welcomed.

"Uhuru has helped me sustain my work by providing me with equipment. Also, because I am a father of four, I was offered supplies and was able to pay school fees, and I appreciate anything I received," he added of the Head of State. 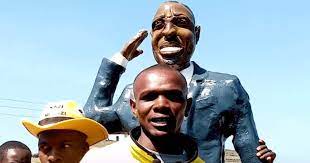