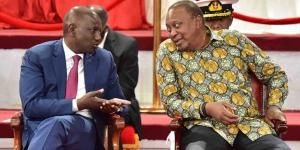 Speaking to the press, the Treasury CS confirmed the existence of the agreement but denied allegations that Uhuru had mortgaged the country's infrastructure.

The leaders had claimed that the agreement to sell the Ports of Mombasa, Lamu and Kisumu had been handed over to the UAE in March 2022.

Specifically, the team claimed that President Uhuru had sealed the deal that will see a Dubai-based company take over operations at the three ports.

Yatani, however, clarified, that the agreement was aimed at attracting investors into the country, maintaining that the state would not lose any of its assets.

The CS further noted that the state would not use its finances to build the ports but would reap the benefits from the job employment and taxes likely to result from the businesses.

"The Kenyan government is attracting investors into the country and by that not losing any of its assets or benefits but realise more revenue, employment opportunities for its citizens.

"We have identified various areas that we would collaborate on including ports, railways and special economic zones. The government will not use any money in the project but will benefit from the revenues earned and taxes generated," Yatani told Citizen TV.

The CS also maintained that the agreement has not yet been finalised as it is still in its early stages of negotiations.

In a separate statement, Azimio la Umoja presidential candidate Raila Odinag also dismissed the allegations as a ploy by his opponents to remain relevant.

"I have consulted with the Rt Hon Raila Odinga, the Azimio presidential candidate, about this matter. He has undoubtedly dismissed these allegations with the contempt they deserve. Mr. Odinga is not in government or part of it and does not have any legal capacity to enter into any official contracts or agreements on behalf of the state.

"This latest attempt, like many others, is uncalled for and unbecoming of a side picking anything and everything to shore up their dwindling numbers. The allegation against the name and person of Hon Raila Odinga borders on the libelous and is devoid of any truth or substance," read the statement in part.

In the address, Kenya Kwanza claimed that the agreement came about after the 2018 handshake between Raila and the Head of State.

"In a secret deal under the guise of an Economic Cooperation Agreement with the United Arab Emirates, and which epitomises grand corruption; Uhuru has assented to a rip-off that will see a foreign privately registered entity – Dubai Port World FZE – take over these key national infrastructural assets.

"Indeed, why would a government with only less than five weeks to leave office hurriedly and secretly auction the operations, development, redevelopment and management of all our ports to a foreign entity?" The statement read in part.

Buying A Car From Mombasa ? This What You Need To Know

"Bado Mapambano" Provisional Results Show A Heated Race Between Raila And Ruto, See Who Is Ahead

Mutahi Ngunyi Speaks on Presidential Election Results Being Tallied, Claim It Will Be Nullified