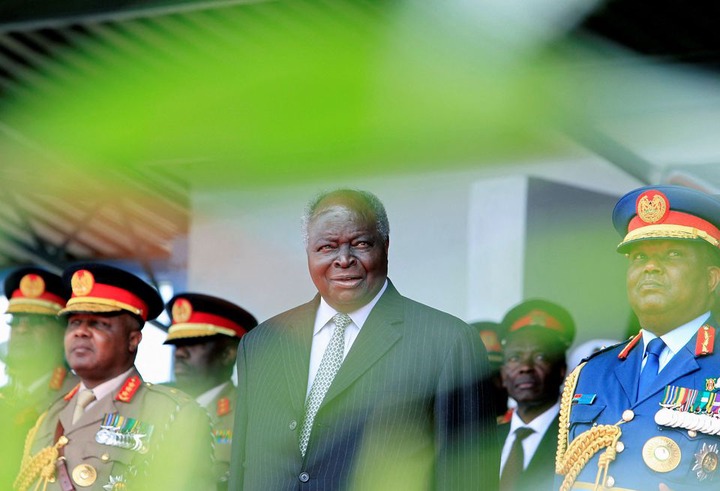 From December 2002 to April 2013, Emilio Stanley Mwai Kibaki served as Kenya's third President. From 1978 until 1988, he was Kenya's fourth Vice-President, serving alongside President Daniel Arap Moi for ten years. As a minister of finance and international affairs in the Jomo Kenyatta and Daniel Arap Moi governments, he was also a cabinet minister.

Kibaki was born on November 15, 1931, in Gatuyaini village, Othaya division, Nyeri District, Kenya (now Nyeri County). Kibaki Gthnji and Teresia Wanjik, Kikuyu villagers, were his parents. Though he was baptized as Emilio Stanley by Italian missionaries when he was a child, he has always been known as Mwai Kibaki in public. Kibaki began his education at a local school in Gatuyaini, which he attended for two years.

.Between 1944 and 1946, he attended the Karima mission school near Othaya town, before transferring to Mathari School (now Nyeri High School). He acquired carpentry and masonry at the institution in addition to his academic pursuits. Following Karima Primary and Nyeri Boarding Primary Schools, he attended Mang'u High School from 1947 to 1950, when he received the top grade in his O Level examinations.

Kibaki considered entering the army during his final year at Mang'u, but his plans were blocked when Kenya's Chief colonial secretary, Walter Coutts, forbade members of the Kikuyu, Embu, and Meru groups from joining the military. Kibaki instead studied economics, history, and political science at Makerere University in Kampala, Uganda. In economics, he received a first-class honors degree. Kibaki stayed in Uganda after graduation, working for the Shell Company of East Africa. After that, he received a scholarship that allowed him to pursue postgraduate study at any British university. He went to the London School of Economics and graduated with honors with a BSc in public finance. He returned to Makerere in 1958 as an assistant lecturer in the economics department, where he remained until 1961.