Martha Karua, the Narc Kenya leader and Deputy Presidential candidate for the Azimio la Umoja one Kenya coalition, conducted the Azimio campaigns to Chogoria and Chuka in Tharaka Nithi County on Thursday, May 19th. Ms Karua has advocated for tolerance during campaign rallies since her announcement as Raila Odinga's running partner last Sunday on day three of the campaign.

Ms Karua, who shared her message on Twitter, urged political opponents to treat each other with mutual respect and tolerance, despite their ideological differences, emphasizing that the August elections will come and go, but Kenyans will still need each other in their lives.

"We can differ without insults or heckling, no matter where you stand." Because we will still have to live with one other beyond August 9th," Karua wrote. 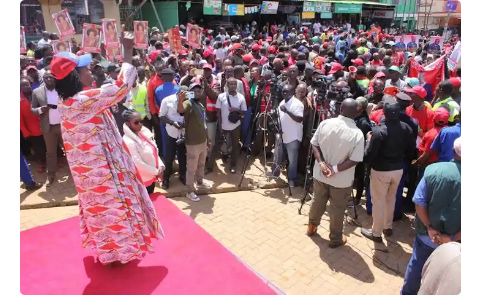 Karua also encouraged politicians not to utilize tiny handouts to entice innocent youths to cause mayhem at opponents' rallies and campaigns. Instead of exploiting Kenyans for their own gain, she challenged them to come in person and take the microphone from her. She urged Kenyans to separate themselves from chaotic politics and stop being exploited by self-serving politicians. 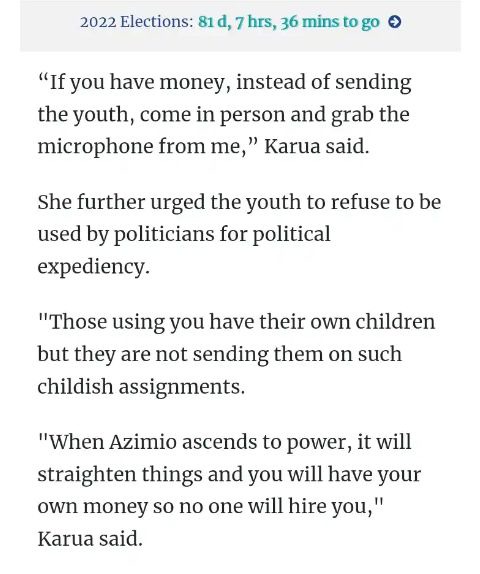 Her declaration comes shortly after she was announced as Raila's running partner and was greeted enthusiastically in her native county of Kirinyaga. Given her uncompromising position on the fight against corruption, several political observers believe Karua's selection as Raila's deputy has a high chance of gaining indecisive votes, women, and integrity voters.

"Wanaaibisha Nchi" Uhuru's Cousin Sends Uhuru-Ruto Another Warning, Urges Them Do This Ahead Of 2022

Ruto finally speaks on the leaked audio and reveals these about Uhuru Kenyatta.

Kenyans React As DP Ruto Comes Clean On Why He Almost Slapped Uhuru.