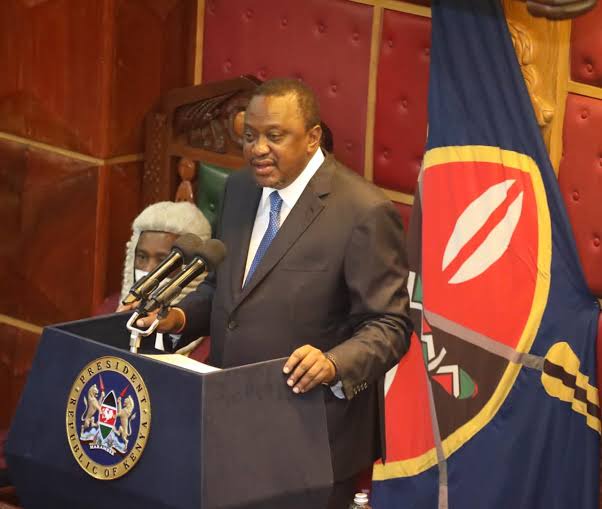 Uhuru Kenyatta has held a State of The Nation Address at parliament buildings before Members of Parliament and speakers of the two houses.

In his speech, the president outlined his achievements, goals and policies that he has been able to implement during his 8 years as president. He talked about KRA surpassing its tax returns target, the expansive road network in the country, SGR where he noted that over 6.9 million Kenyans have used the train since its inception and his Covid-19 stimulus packages.

Before he left the stage, Uhuru did not forget to state a word or two about the elephant in the room, corruption. Despite saying that the country's economy had improved from position 12 to 6 in the continent, he admitted that massive graft is still taking root in the country.

He noted with displeasure that Kenya is not anywhere close to reaching its potential because of unscrupulous government officials. Uhuru compared Kenya to a sleeping giant and that the country could become one of the developed massive economies in Asia that have shifted from poverty to riches within half a century.

"President Uhuru Kenyatta: We can be like the four Asian Tigers of Hong Kong, Taiwan, Singapore and South Korea if we stop stealing," he said.

Most Kenyans however faulted the president's statement saying that stopping corruption is within his powers.

"Now who stealing here, it's the politically correct who steal public money and siphon it out in foreign countries,Wanjiku has no access to any money to steal." responded a Twitter user @MutukuMuisyo.

"If we stop stealing and stashing in the offshore accounts," noted @Kipkirui.

"So does that mean Kenyans have refused to stop stealing ?...." Posed @Burjaj.

"President should name the person who is stealing," noted @opemi23.

How do you tell when it is time to call it quits in a relationship?

Ways To Make Your Ex Regret Breaking Up With You

One Simple Choice Enhances the Benefits of Gratitude