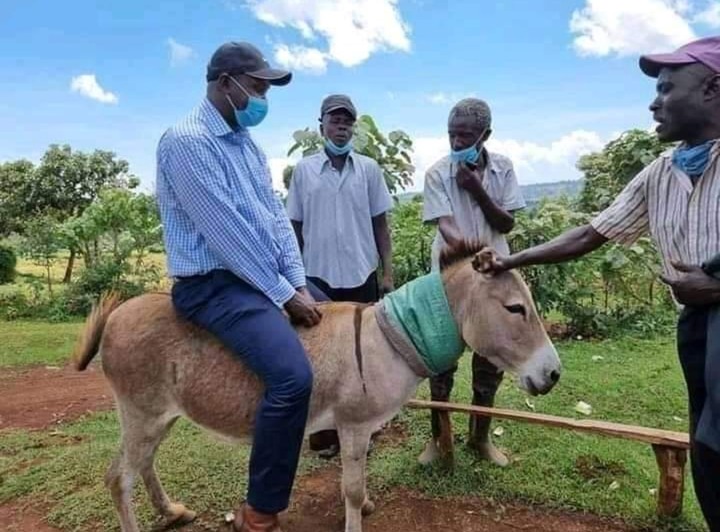 Even as the 2022 elections is fast approaching, many leaders who have intrest in vying for their seats to be re-elected into Office have been on the spot for allegedly neglecting their subjects. Various Mps have also been seen rushing to their Constituencies to repair roads and other social amenities.

The Culture of donations and issuing of handouts by politicians from all Camps have been the norm, especially with those belonging to the Tangatanga faction, for the past few Months while holding their political rallies and drumming up support for their 2022 bid.

However, the Member of County Assembly for Kapsoit Ward, in Kericho County Hon Paul Chirchir Tarimbo has been on the receiving end for the last 24 hours after allegations that He donated a donkey to a business woman in His Ward to be using for transport purposes.

The MCA was pictured standing with a few Villagers sorrounding Him, while holding the Donkey, and later sat on the back of the animal. This sparked reactions from Kenyans who felt that the MCA is a jocker, for making such donations instead of upgrading the lifestyles of His Subjects through more sophisticated means. 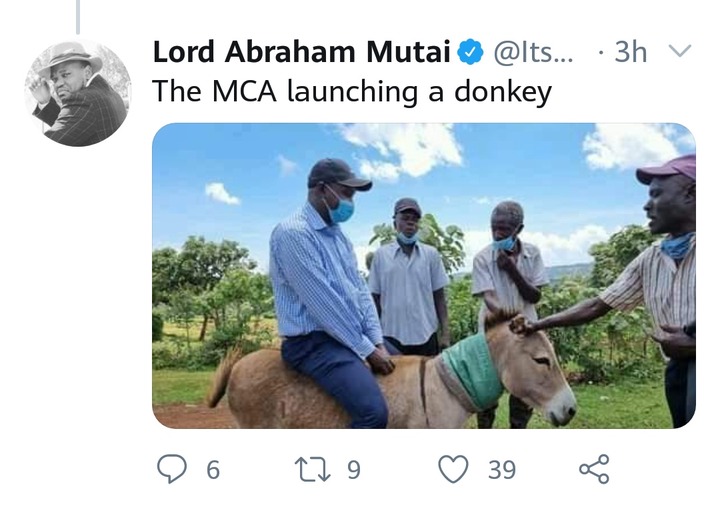 Blogger Mutai took to His Social media handles today's to express His displasure on the way the MCA is conducting His activities. Mutai posted a picture of a project which has been stalled for long, with construction not ongoing with the lawmaker being one of the leaders directly involved with such projects.

This comes after a section of leaders have been blamed for the problems that Kenyans are experiencing for allegedly squandering the amount of money that was supposed to be used in the Construction and maintenence of such important amenities.

Narok Senator Ledama Olekina yesterday took to twitter to Lament saying that Kenyans should be at least fair and easy on their leaders, and stop abusing and throwing insaults to them for the problems that the Nation is going through right now. He also said that some leaders are suffering from Hypertension, HIV, Cancer and other deseases and any more pressure can cause more trouble. 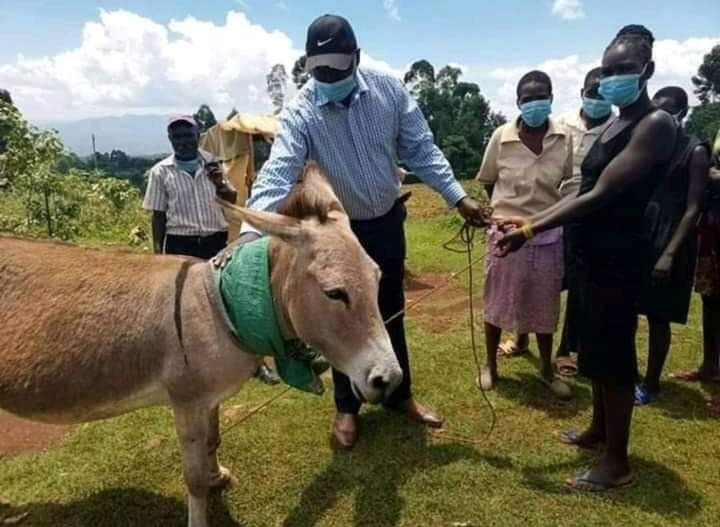 There is also a hashtag that's has been doing rounds on social media, saying hat Kenyans should be ready to completely vote out wrong leaders who have neglected their grievances and other important projects in the grassroot levels even as the enjoy lives with high end Cars and good houses.

Political Rivalry Between ODM And Jubilee Intensifies In Bonchari By-elections

Mulled Plan by Uhuru and Raila to Save BBI Bill

Presidential Candidate Attracts a Small Crowd in His Consultative Meeting

The Outcome That Kenyans Should Expect From the By-Elections