Crowd bursted to laughter after the Homa Bay governor Cyprian Awiti declared Ruto as "Sura Mbaya" who should not be given an opportunity to rule the country. While speaking in Luo dialect, the Homa Bay governor Cyprian Awiti stated that despite not handsome he thinks that he is much better than the DP Ruto. The statement by the governor made the crowd to burst to laughter following his new name to the DP Ruto.

The governor also declared himself the general governor of all the Nyanza region as he declared that he won't entertain the nonsense being spearheaded by Ruto's hand man Okoth Obado. 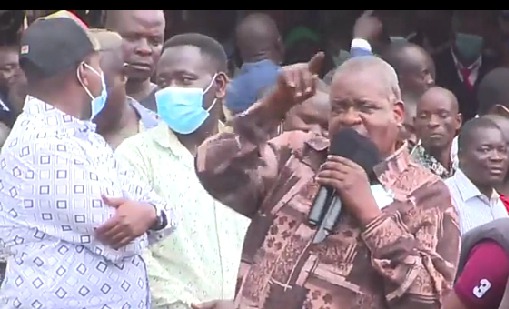 In addition to that, while speaking in Luo dialect, John Mbadi promised to deal with Okoth Obado who is against the prime minister as he declares Odinga as the pope of ODM party followed by him who is the bishop of the ODM party.