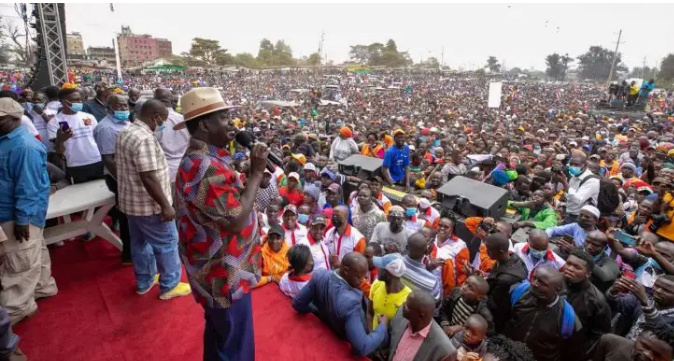 Former Jubilee party nominated senator Isaac Mwaura sought to pour cold water on the huge numbers that the former Prime Minister and Orange Democratic Movement party leader Raila Odinga has been enjoying during his recent trips on the mountain.

However, in doing so, he has ended up confessing to something that is likely to attract controversy.

The Ruiru parliamentary seat aspirant made his claim while appearing on Radio Jambo’s weekly political show Mazungumzo Wazi Wazi which was hosted by Bramwell Mwololo.

Isaac claimed that the so-called inroads which the ODM leader has been making in Central Kenya were all imaginary, since huge numbers at the rallies could never be a proper indicator.

He revealed that when he was in ODM, he and Peter Kuguru would use their own means to ensure that stadiums in Thika town were full.

Without disclosing whether the tactics they used to fill stadiums were unsavory or not, Mwaura said that eventually, the huge numbers never translated into votes. He went on to say that a similar thing was replicated in Meru.

He said that while in the Orange party, they raided the Eastern Mount Kenya region of Meru and held a string of mammoth rallies, in all of which they urged voters to choose Raila Odinga in the polls.

The now staunch Deputy President supporter however said that when it came to the election results, they were surprised to find they had managed to secure only 50 thousand votes.

Just this past week, Mwaura led a delegation from Ruiru and other parts of Kiambu to the Deputy President’s official Karen residence.

In the meeting, the group promised to support Dr. William Ruto fully in his quest to succeed president Uhuru Kenyatta.

Ruto, on his part, emphasized on his bottom-up approach, and promised to improve the living standards of all low income earning people popularly known as hustlers.