The Gatundu South MP Hon Moses Kuria who has been off the political arena fir sometime after he got an accident and got admitted into various hospitals within and outside the country has broken silence after claims of top politician who allegedly paid his hospital bills. 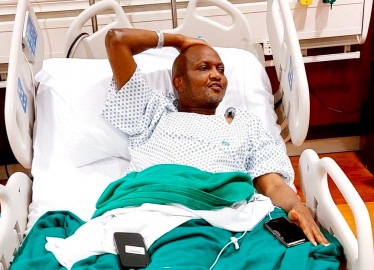 In his remarks, Dikembe Disembe claimed that Deputy President William Ruto had paid Kuria's hospital bills after he was admitted in hospital.

"@HonMoses_Kuria’s medical bills have been sorted by William Ruto, now he thinks his self-interest is national interest. “Your friend” Raila Odinga will win this election just as he’s won the previous. The difference is that he will finally form government," Disembe claimed.

Kuria however responded to Disembe saying that he is broke and everybody pays him including Former Prime Minister Raila Odinga and President Uhuru Kenyatta.

Disembe brought the allegations against Kuria after his post claiming that the tremors in the country were part of a revolution.