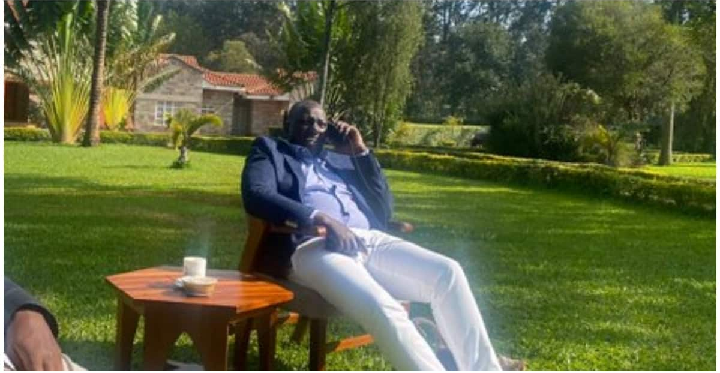 In a photo shared on social media, Ruto was captured relishing the sunlight while relaxing with MP Caleb Kositany

Deputy President William Ruto is now relaxing at his luxurious Sugoi home after casting his vote on the early morning of Tuesday, August 9.

The Kenya Kwanza presidential candidate was the first voter at Kosachei Primary School, where he was accompanied by his wife Rachel; they arrived at 6 am.

After voting, Ruto opted to stay in Sugoi to relax as voting continues countrywide.

In a photo shared by outgoing Soy MP Caleb Kositany, Ruto relished sunlight while relaxing with the lawmaker.

In another post by Uasin Gishu gubernatorial candidate Jonathan Bii-Chelilim, Ruto and his wife also received visitors who wished him well as the electoral process continues.

"I have paid a courtesy call to our 5th Presidential, H.E William Samoei Ruto, at his Sugoi home in the advent of the ongoing peaceful voting process. I have gladly extended my regards to our hopeful incoming President and wished him well as we look forward to a smooth conclusion of the Election process throughout the Country," he said.

TUKO.co.ke reported when the Kenya Kwanza presidential candidate became the first voter to cast his vote at Kosachei Primary School in Sugoi.

His wife, Rachel Ruto, accompanied him on the early morning of Tuesday, August 9.

According to pictures shared, Ruto and his spouse, who were all smiles braved the morning cold to vote.

He was the first to cast his vote at Kosachei.

"I feel so good that after campaigning and speaking to the people of Kenya. Everybody here wants a peaceful election. That is why we had a spontaneous prayer because we want a peaceful process," he said after voting.

In other news, Ruto's running mate Rigathi Gachagua arrived at Sagana Primary School polling centre accompanied by his wife Dorcas Rigathi, their sons and his aunt.

Speaking to the press, Gachagua said he was impressed by how IEBC was conducting the Tuesday elections.

The lawmaker asked Kenyans to maintain peace during and after the hotly contested elections.