The Orange Democratic Movement Party and the Jubilee Party have spoken out in response to the much-awaited verdict on the Building Bridges Initiative, as the Judiciary breaks its silence on what Kenyans should expect during the ruling.

The president of the court of Appeal Justice Musinga is presiding over the judgements of the building bridges initiative case that was heard in the last one-and-a-half month ago. After making his introductory remarks, Musinga said that he will offer an opportunity to every Judge in the bench to make their judgements according to their thinking and personal capacity. 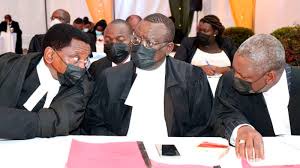 All parties are eagerly awaiting the ruling because it will determine the next step to take as democrats.Two judges who have already given out there ruling have differed on the number of Independent electoral and boundaries commission commissioners that approved the signatures.According to Fatma the signature verification doesn't matter.

Justice Kairu has been the most recent one to give his verdict. He says that there is no explicit ban against a person, including the president from promoting a constitutional amendment by popular initiative. All players including President and Raila Odinga qualify as promoters of the bill. He also pointed out that a constitutional change is a preserve of the people exercising sovereign power and to that extent, he says he is in agreement with high court. The framers of the constitution clearly identified what is the basic structure of the constitution