Will Handshake Save Raila's Presidential Bid? 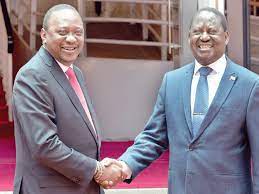 As politicians says that there are no permanent enemies in politics. This was proved when President Uhuru Kenyatta and his most fierce rival former Prime minister Raila Odinga decided to put away their differences for the unity of Kenya.

After the famous handshake the two leaders have been working closer something that has brought peace and stability in the country. It has also been observed in parliament where by those of opposition and in government work hand in hand as compared before handshake.

Tribal politics started way back during president Jomo Kenyatta and Jaramogi Oginga which lead many deaths and displacement of peoples. Since then there has been tension in the country during every elections.

The worst was the 2007 skirmishes that happen after elections which lead to loss of lives. The country was so divided that world leaders had to intervene.

President Uhuru Kenyatta will be in history as the first not only in Kenya but in the world to allow an opposition leader to be his successor.

Raila Odinga will also be on record as the first president from outside central and rift valley regions as it has been observed in the previous elections.

This will be a very positive results which shows how Kenya has really progressed in politics. Lets all pray for peace in our country and we should always love one another.

Keep following for more news and comments are always welcomed.

DP Ruto Arrives In Kiambaa For Another Tour Of Uhuru's Backyard