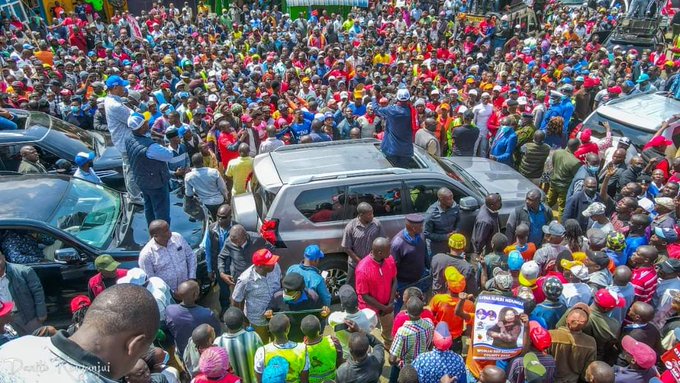 t has been less than 35 days since the announcement of the upcoming general election in Kenya, in which more than 20 million people are anticipated to cast their votes for the next set of leaders. These elections will determine who will serve as president, vice president, and attorney general of the country.

William Ruto, the current vice president of Kenya and a candidate for the presidency for the first time, will face off against Raila Odinga, a former prime minister of the country.

The peak that has a significant number of votes. Because Kenya does not have a competing presidential contender, the region has turned into a battleground for the two leading candidates. This is one of the consequences of the lack of a candidate.

As a result of this, both Raila and Ruto have established camps in that region and are pleading with residents there to support them in the next election by voting for them.

On Wednesday, Raila Odinga traveled to President Uhuru Kenyatta's hometown of Gatundu South to pay a visit to the president's home seat. Raila Odinga considers President Kenyatta to be his "handshake brother."

He said When they first met, Jomo Kenyatta took him by the hand and greeted him in Kiswahili. He then proceeded to say a few things to him in the language.

The crowd erupted in cheers at this moment, which may easily be interpreted to mean that the azimio chief is making tremendous progress in his endeavor to climb the mountain.

What conclusions can you draw from this information? On our commenting platform, you are free to share your thoughts and views on this subject at any time. We look forward to reading what you have to say.