My father assured me of my share, man who claims to be Kibaki's first born says

By DailyNews.com (self media writer) | 4 months ago

Talking to The Standard newspaper, Jacob Ochola, who claims to be the first born son of the Late former president Kibaki said that his father had assured him of his share as an entitlement for being his son. Jacob Ochola who resembles the former president from a single look was born in July 22 1960 at Kaloleni in Nairobi. 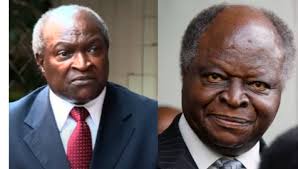 The alleged Kibaki's first born son began the interview by thanking President Uhuru Kenyatta for the descent burrial he accorded to his dad. He also extended his condelences to the family of the deceased and the entire Othaya region, the home of the late president Kibaki.

Jacob Ochola claimed that he grew up knowing he was a Luo untill he was 21 when his step died. He claims this was the the time when he knew that Kibaki was his biological father after his mother disclosed to him. Ochola also claims to have interactd with the late president atleast 3 hours wheneve he ;isited him at Sirikwa Hotel and Mombasa beach where he used to work as a manager. He also claims to have visited the president at his home in Othaya together with his then 11 year old son and his driver. He also talked of his aunt(Kibaki's) sister and she could not help that much for she could not access the president too. The alleged son to Kibaki says that his father had assured him of his share of inhertance as entitled to any other man.