By THECAMERA (self meida writer) | 1 months 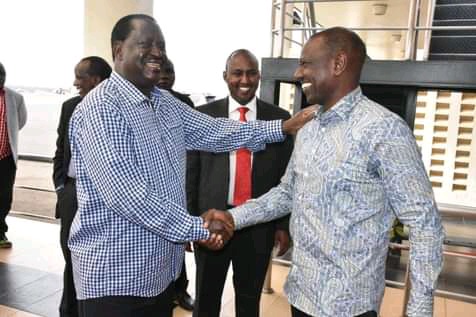 Why Raila And Ruto Are No Longer At Ease Over Politics In The Coast.

Unrelenting forays by ODM leader Raila Odinga and Deputy President William Ruto into Coast have stirred a debate over the political future of the region ahead of the 2022 polls.

On Friday, Raila completed his five-day tour in four coastal counties barely 14-days after Ruto’s visit, in what is now being touted as the scramble for the region’s 2.4 million-odd votes.

As Raila left on Friday, Kanu chair and Baringo Senator Gideon Moi also arrived in Taita Taveta County to drum up support for the BBI. Last month, Moi also held rallies in Lamu and governors Hassan Joho and Amason Kingi are also engaged in a supremacy war in the Coast.

The DP, who increased his tours after the Handshake between President Uhuru Kenyatta and Raila in 2018, appears to have been emboldened by Feisal Bader’s win in Msambweni the by-election.

He has held rallies and funds drives in Kwale, Taita Taveta, Kilifi and Mombasa counties, which were also the target of Raila’s tour but Raila also appeared to be on a fire-fighting mission in his own ODM party which has had a firm grip on Coast politics since 2007.

This is after his point men, Joho and Kingi, turned down his overtures, including a proposal to the latter to drop the plan to form a Coast-based party.

Raila was, however, successful in his quest to consolidate his support base after most of the leaders that had earlier joined the DP’s camp trouped back to ODM.

Political analysts in Coast are now debating whether the ODM leader will enjoy the same fanatical following in 2022 or the region was turning to be to a toss-up vote bloc.

But they say that given the ethnic, racial and religious diversity in Coast, the up-country parties will continue to dominate the region’s politics in the 2022 General Election.

Others say that increasing ethinicisation of Kenyan politics could eventually result in a degree of autonomy for the Coast, especially along religious lines.

Coast Gema chair Waithaka Macharia estimates that there are over 250,000 people from Mt Kenya living in the region, with most of them in Mpeketoni in Lamu and Mtwapa in Kilifi.

Mwidau said the dismissive attitude by Ruto and Raila towards the plan to form a Coast-based political outfit has emboldened its proponents and galvanised the masses to support the idea.

So serious has Kingi been that he is said to have courted Kwale Governor Salim Mvurya of Jubilee to join him in o uniting the Coast under a new outfit.

Gideon Moi Ally Predicts Where Ruto, Raila and One Kenya Alliance Will Finish in 2022 if BBI Flops

Ruto's 2022 Possible Alliance That Will Shake The Nation [Opinion]

The List Of African Presidents Who Have Died While In Power