By Thetopnotchnews (self media writer) | 7 months ago 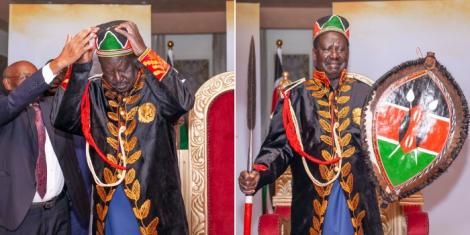 Raila Odinga and Ida Odinga During the Awarding Ceremony Held in Nairobi Friday October 15"/> Amollo Odinga, the leader of the Orange Democratic Movement (ODM), got a high-profile award on Friday night, October 15, adding to his already long list of achievements.

The former Prime Minister was dressed in traditional garb, similar to that of his late father Jaramogi Oginga Odinga, for the event, which was held at the opulent Villa Rosa Kempinski Hotel in Nairobi.

He was honored for his efforts to promote his country's unity, democracy, and growth. The event's highlight was Raila's contribution to peace, unity, and progress.

The Hekima Kaka Society hosted the prestigious prize event. The society's justification for honoring the ODM leader underlined that his historic handshake with President Uhuru Kenyatta on March 9, 2018, following the tumultuous 2017 General Election, altered Kenya's politicsRaila was honored for his remarkable and beneficial commitment to democracy, unity, and progress, according to Hekima.Agnes Salome started the Hekima Kaka Society in 2008 to address the suffering of Kenyan boys and men.

Raila, for one, expressed gratitude to the community for recognizing his efforts to promote democracy in the country.

“Thank you for doing this; organizing a gathering like this takes a lot of time, and I am looking like a king,” he said.

He praised African leaders for advocating our continent's unity and established the Organisation of African Unity (OAU).

"I am a Kwame Nkuruma student, and personalities like Julius Nyerere, Milton Obote, Samora Machel, and Nelson Mandela, among others, inspire me," he continued.

Raila has garnered various awards throughout his political career. The unexpected handshake with Uhuru has earned him even more plaudits on worldwide platforms.

He is also the High Representative for Infrastructure Development for the African Union. The role comprises managing a variety of development projects across Africa.

Ruto, Ruto, Chants Fills The Air As Martha Karua and Her Team Addresses The Public in Embu County.