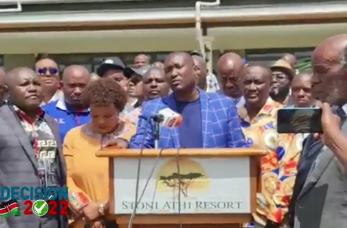 A section of Wiper Party leaders and aspirants have urged their party leader Kalonzo Musyoka to reconsider his decision of ditching the Azimio La Umoja One Kenya Alliance, and go for the presidency.

Kalonzo had announced his presidential bid last week and further unveiled his running mate, Andrew Sunkuli after bolting out of the Azimio Camp

Speaking to the media from Athi River after they held a meeting on Monday, the leaders led by Kathiani MP Robert Mbui implored Kalonzo to first exhaust all the avenues of disputes resolution within the Azimio Coalition, before he finally makes his final decision.

"May be it is time we exhaust all the options that are available under the Azimio-OKA team, there is a disputes solution committee in Azimio. We request our party leader if he can reconsider the possibility of having further negotiations on this coalition arrangement. The main issue we said we were going all the way to he ballot was because there was no structured discussions," said Mbui. 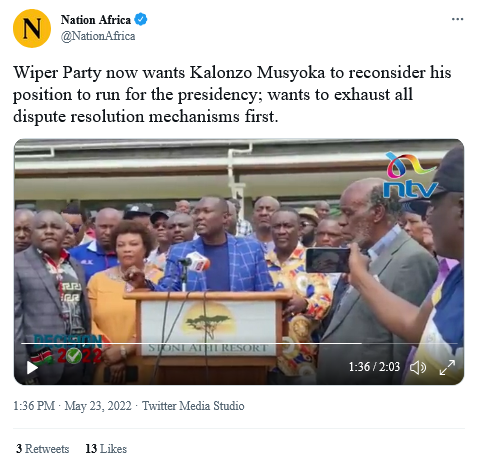 Kalonzo announced to break his ties with Azimio after he failed to get the running mate position which was give to Martha Karua, the Narc Kenya party leader.

The leaders' statement comes at a time when the Wiper's running mate Andrew Sunkuli has attended the IEBC's pre-nomination meeting that was led by the IEBC chairperson Wafula Chebukati, and took place at the Bomas of Kenya.

Pressure has however been mounting on Kalonzo to rejoin Azimio and take the Chief Cabinet Secretary position that Raila had assigned him, although some of his allies argue that the post is unconstitutional.