By NewSpy (self media writer) | 7 months ago

Kinyajui was handed the ticket on Sunday, April 17, and will be pitted against George Koimburi, a former buddy of his brother's who won the UDA nominations in Juja.

Moses Kuria, who sponsored him in the Juja by-election last year under the People's Empowerment Party (PEP), brought his primary competitor, Koimburi, to elective politics.

After PEP was taken over, Koimburi split with the Gatundu South MP, prompting the Juja MP to join UDA. 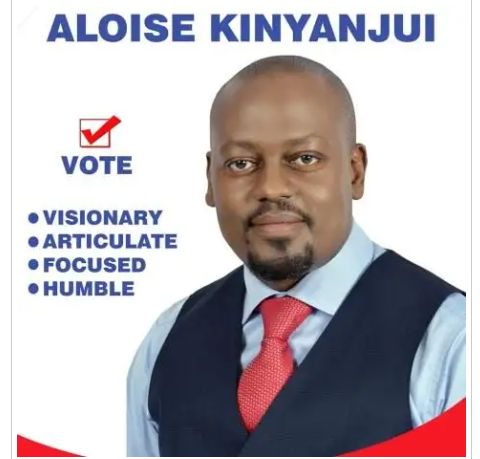 Aloise and Koimburi had a political feud in the past over the incumbent's development record, which included the management of a public toilet.

Aloise worked as an investigator for the Directorate of Criminal Investigations before retiring to run for office.

Meanwhile, Joel Ngigi Kuria, another Kuria brother, is the Chief Officer of Agriculture in Kiambu County and is campaigning for Kiambu Governor James Nyoro on the Jubilee ticket. On a Chama Cha Kazi ticket, Moses Kuria is attempting to topple Nyoro.