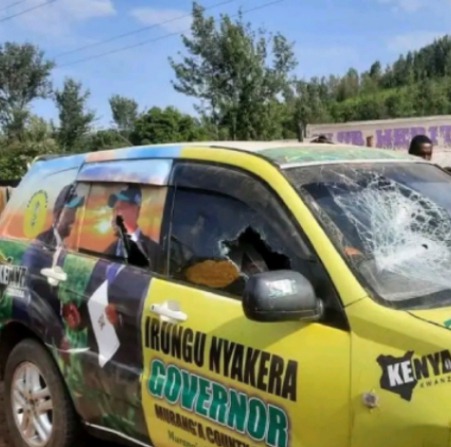 Politics have created enmity among citizens due to political indifference leaving others dying and others suffering serious injuries.

Today on Sunday afternoon, supporters of different gubernatorial suffered serious injuries as others were left admitted to hospitals.

Several vehicles were also destroyed from the scuffle between Irungu Nyakera and Joseph Wairagu who are both former permanent secretaries.

The incident happen in in in in Kaweru, Guru where Wairagu supporters attacked Irungu with knives, guns, and wild weapons.

To surprise, both are under the Kenya Kwanza coalition led by Deputy President William Ruto through different parties.

Wairagu is running on the Democratic party ticket while Irungu running for the gubernatorial seat on The Farmer party.

Irungu blamed his political rivalry for ambushing his team with a group of youth who were armed with knives and guns.

One of Irungu's staff members was seriously injured and he is currently admitted to Murang'a Level 5 hospital.

Seven other people were seriously injured and were rushed to the hospital for quick medication while several cars were destroyed by the scuffle.