By your-udaku-mate (self media writer) | 1 month ago

Kenyans have at last responded to Stephen Kalonzo Musyoka, the leader of the Wiper Democratic Movement Party, during the press conference after Ruto's appointment of Musyoka as his cabinet secretary.

Ruto was challenged by Kalonzo Musyoka to quit making false promises to the helpless Kenyans and start working on the country's critically ill economy. He continued by saying that Ruto's cabinet members required careful examination since he said they were unfit to hold public office. 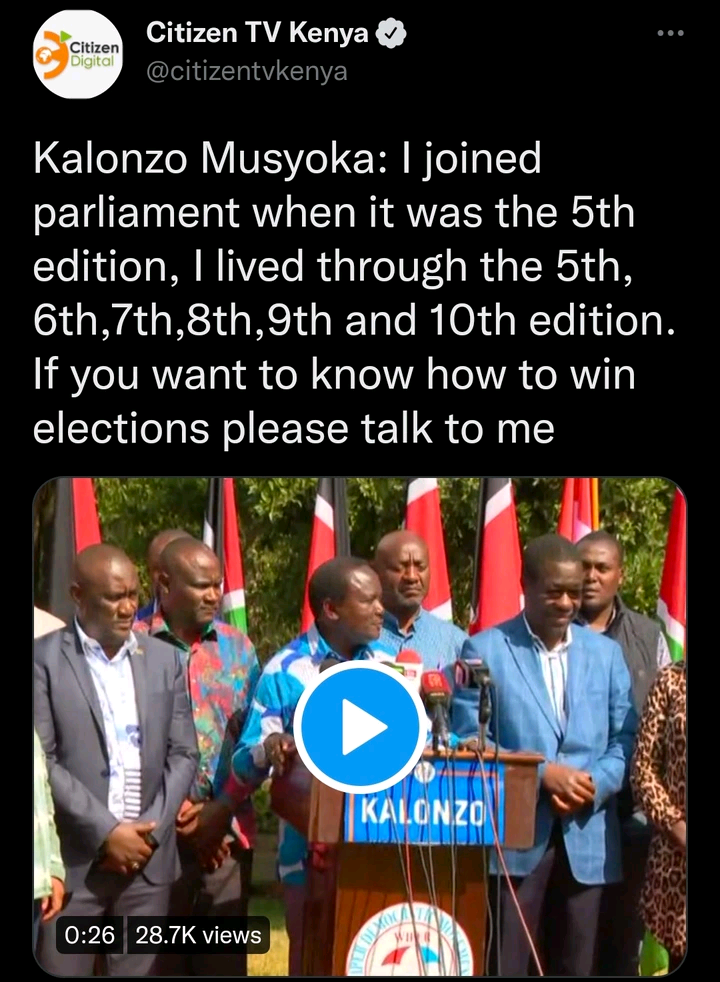 Kenyans were particularly shocked by what Kalonzo stated about the elections after losing to William Ruto in the recently completed polls. He has alienated Kenyans by asserting that anyone who wants to win an election should speak to him because he knows how to do it.

"When Parliament was in its fifth iteration, I joined. I experienced the 5th, 6th, 7th, 8th, 9th, and 10th editions firsthand. Please speak with me if you want to know how to win elections." said Kalonzo Musyoka.

Kenyans have responded to Kalonzo's comments by asking what he is saying despite the fact that they lost alongside Raila Odinga. People are now speculating as to how Raila placed his trust in Kalonzo Musyoka to win the just held August elections. Netizens are inquiring as to where Kalonzo was while Raila Odinga was losing, claiming that he actually knows how to win elections and accusing Raila of failing primarily due to the type of individuals he normally hangs out with.

"Baba had complete faith in these men to win the election. It makes sense why he keeps losing," said Neshkie. They have also admitted that Azimio lost because, despite the current shift away from traditional politics, they are still entrenched in old methods of doing things. Here are the Responses.

"I Regret Visiting Nduthi Guy, he Promised to Marry me But he Defiled, Impregnated me And Ran Away

Lawyer Omari Alleges The Powerful Individuals Permitted To Import Maize, Says No One Can Stop Them