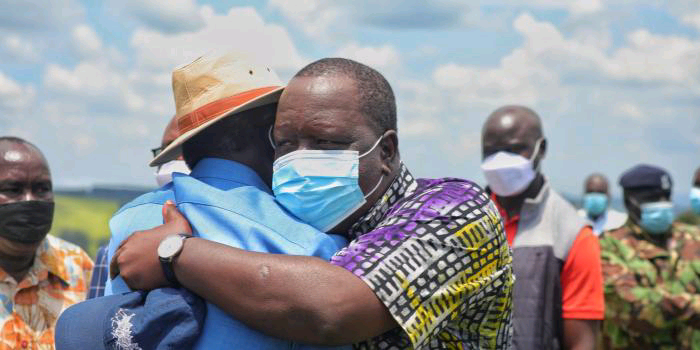 Fred Matiang'i, the Interior Cabinet Secretary, has revealed that in his capacity as the CS, he has received several intelligence reports indicating that Raila Odinga, the leader of the Orange Democratic Movement (ODM), is gaining popularity.

Matiang'i indicated during a fundraising event for Mwongori High School that he had received reports indicating that Raila would form the government following the August 9, 2022 elections.

Matiang'i remarked that after reviewing the reports, it was evident that the majority of Kenyans backed Raila and President Uhuru Kenyatta's handshake on March 9, 2018.

He also asked his community for permission to support Raila, claiming that Uhuru was closely cooperating with the ODM leader and that Odinga will form an administration in 2022.

The CS believes the Abagusii should be in power after the 2022 elections and warns that if they take a different path, they would remain in opposition and miss out on important possibilities.

"I've made a promise to these folks from my house, and I've publicly stated that I'll be where you and the President are." It's not a good idea to do dumb things at the expense of these individuals," Matiang'i said.

He also chastised local leaders who hopped from one political party to the next, urging them to take a stand and support one candidate if they want to win votes from the community.

President Uhuru has entrusted him with numerous responsibilities since 2013, when he first formed the administration, according to the Interior CS.

Matiang'i intimated in September 2021 that President Uhuru and Odinga were grooming him for active politics. The CS stated that he has concrete preparations to assure his inclusion in the future government.

"Uhuru and Raila are preparing me to take their place," Matiang'i told the locals.

President Uhuru Kenyatta and Raila Odinga's involvement in selecting who becomes the next president cannot be overlooked, according to the CS, who is closely following in their political footsteps.

In participating in the country's leadership after the 2022 General Election, Matiang'i stated that the Gusii community must be strategic.