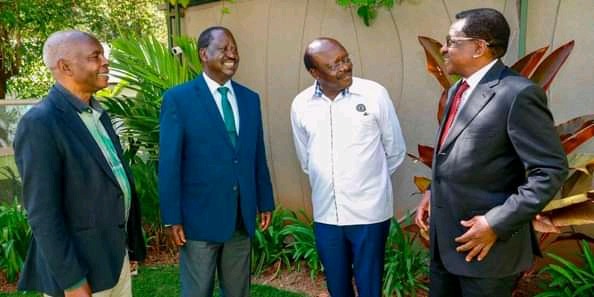 Emerging details have opened the lid on why the political players said to be working on a coalition agreement with ODM leader Raila Odinga are keen on keeping the progress of their talks secret.

Raila and his allies have twice held telling meetings with some big political players, among them second term governors, in an apparent bid to form a 2022 coalition, which can help him deliver the presidency.

He has also been keen on striking a deal with former UNCTAD Secretary General Mukhisa Kituyi, who on Tuesday attended a meeting hosted by Siaya Senator James Orengo, a close ally of Raila, at a Nairobi hotel.

Details indicate that Kenyans might not be told about the progress of the talks any time soon, as Kituyi and the others would rather remain silent, so as not to alert the other people who they are also in talks with.

The Standard reports that most of them are trying to put themselves in a position that can prevent them from clinching better deals, and are also having second thoughts about the 'domineering' ODM.

Sources who attended the Tuesday meeting told the paper that the leaders discussed their post-election agreements and the roadmap to be used.

The paper was told that more meetings will he seen between the two in the coning days, even as Raila remains silent on whether or not he will be seeking the presidency for the fifth time.

"They discussed their working arrangements, a Memorandum of Understanding (MoU) to be worked on by a group of experts and lawyers who will be picked, and their roadmap. There will be many more meetings in the coming weeks and months before they solidify their political marriage,” a source said.

Others were Mohamed Kuti (Isiolo) and Peter Anyang' Nyong'o of Kisumu County.

Man Kills His Children As Ordered By Employer Then Gives Him The Kids' Blood For Only Ksh120,000.