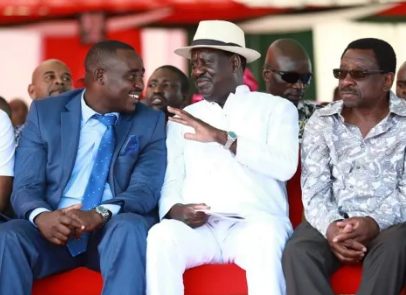 A number of incumbent MPs have fears that the party might give out direct nominations to 'favored' candidates in the coming general elections.

They have since hinted that in case democracy is not considered, they will join the rival parties Amani National Congress, Ford Kenya and United Democratic Alliance.

According to a number of Political Analysts who spoke with People's Daily, in Kakamega County, the ODM is already in two opposing sides with one drumming up support for Deputy Governor Philip Kutima and the other arguing that Shinyalu MP Justus Mungali would be the party's chairman for fair nominations come next year.

Political Commentator Phillip Atsiaya argued that the ODM party might not deliver good votes to Raila if the rift between the members is not sorted, and leaders seeking the gubernatorial post like ANC's Cleophas Malala and Ayub Savula, UDA's Bonnie Khalwale might run with the post.

"ODM is a strong party in Kakamega but there are chances of it not doing very well in the upcoming elections because many aspirants are fearing a possibility of nomination tickets being given directly to specific persons."