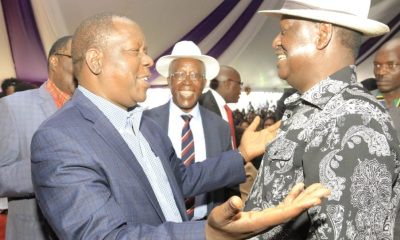 Orange Democratic Movement (ODM) party leader Raila Odinga, has revealed out his earlier agreement which he has arrived at with the Interior Cabinet Secretary Dr Fred Matiang'i about 2022 general elections.

Speaking in Nyamira County today during a fundraising ceremony as aired live through ODM party Facebook page, Raila told the Kisii Community people that at one time they had reached out at an agreement with Interior Cabinet Secretary Dr Fred Matiang'i, to back him for presidency in upcoming 2022 general elections.

Odinga said that he had accepted to step down and support Matiang'i to be the fifth president of the republic of Kenya, but later on Matiang'i withdrew his bid in favour of Odinga because he felt that the competition for next year's heat is very stiff and the only person who is most suitable for now is Raila.

"Me and Mr Matiang'i we are very close friends, and at one time I had accepted to support him but aliona ile msitu iko mbele yake hawezani nayo. Akaamua kuniambia niendelee maana mimi ndio nawezana nayo kwa sasa. I want to assure you that we are working together with your son CS Matiang'i and the Governor for Kisii James Ongwae and all the Kisii Community people." He said.