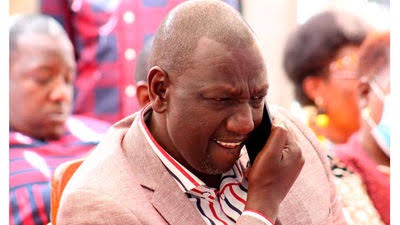 It all started with rumours about his relationship with the president fading off before turning into a reality. At the moment the two can't dine at the same table. Putting in mind that the deputy president was tasked with promoting government projects in his first term. It is very hard for him at the moment where he is no longer involved in government projects. At the moment the dp acts as an opposition leader in the government. This has seen his foot soldiers (close allies) de-whipped from major positions in the government. Some even ended up being intimidated.

The deputy president took over the early campaigns with a bang. But it now seems there are efforts to neutralise his much gained fame. Leaders have been meeting daily with others also starting the early campaign just to ensure that there is shifting of the ground support from the deputy president. After realising the he is to be kicked out of Jubilee the dp decided to rebrand the UDA party. Where his main symbol being a wheelbarrow. This again has been a source of criticism. Many of his opponents rubbishing his wheelbarrow and 'mkokoteni' idea. The dp has faced challenges responding to how possible a graduate can be given a wheelbarrow.

At the moment the biggest challenge the deputy president is facing is explaining his manifesto of the bottom up approach. Hear the deputy President's allies have been found on a crossroad while trying to market the idea. It seems that many do not know really how the approach is.. They have only been hearing the dp talk of it and while trying to sell the idea it becomes hard. This has sparked a very high discussion in the country and everybody is now trying to use different understanding to explain the bottom up approach. While his opponents have taken advantage and are now using funny explanations just to demean the term bottom up approach.

This are just some few justifications to show how its indeed hard becoming the deputy president. The challenges he is facing needs one to be very strong in order to overcome.

How to easily win the heart of a lady