Road to Nowhere: The Big Blunder Raila Did on his First Visit in Mount Kenya

By Wilson_Nganga (self media writer) | 1 year ago

The former Prime Minister's, Right Honorable Raila Amolo Odinga, is not officially on his toes to got round the country drumming up support for his candidature ahead of 2022 general election. With his first meeting being held in Mount Kenya, a place where he has been struggling for decades to convince in his favour without success, it was a chance to hit a big fish out of the political ocean. However, he unknowingly committed a big blunder. 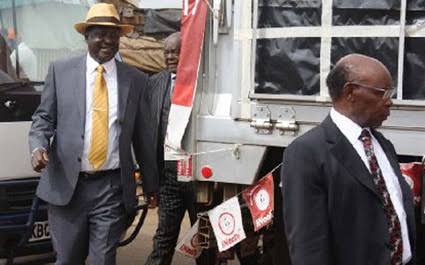 Raila's first meeting was held in Gatanga, at Royal Media Services Chairman, S.K Macharia's residence. S.K has been a strong supporter of ODM Party Leaders, Raila Odinga and this is a fact the high profile business man has never been shy to show. Therefore, using him as a bridge into Mount Kenya would possibly have little or not any bigger change on Raila's popularity in the region as he would be seen as as a norm, rather than a strategy.It would have been more better and even more beneficial to Raila and his supporters if he could have chosen another venue, in the same region, as the former Prime Minister's relation with Dr Macharia has not been so welcomed in this region. For this reason, In my own opinion, SK Macharia can be described as leading Raila on a road to nowhere.

However, although in the presence were many political leaders from different areas of the country, including musicians and politicians from Mount Kenya, it would be presumed, as is now trending on social media, that they were invited to attend in exchange of a consideration, with expectation that their presence would give him a political gain in he region.

However, how good would it be if he chose to start the meeting in a bigger ground of possibly a stadium or a school ground, where's ordinary voters would be allowed to attend? In my opinion, the politicians and musicians may help to convince the ground on behalf of Raila, but it would not be the same if the voter was allowed to attend the meeting directly, and hear what Raila had to say about himself ahead of the next election.

Raila Tell Kenyans That All Their Dreams Can Come True

Why you should Avoid Purchasing cars That Have Been Involved In An Accident.

7 Signs Showing That You Might Live A Long Life

Mixed Reactions As Kenyan Singer, Otile Brown Posts Pictures Of His Ex-girlfriend with a Touching Message

Things You Should Avoid If You Want To Save Money

Governor Kawira and Husband meet former Meru Governor Munya and his wife, reveal what they discussed

6 Signs You're Spiritually Connected To A Person