Delegation at Raila's rally in Nyeri county bursted to laughter after Sabina Chege revealed the list of the Luo men she wants following the handshake deal between president Kenyatta and Raila Odinga.

While speaking at the azimio la umoja rally in Nyeri county, the Muranga senator stated that the Luo guys are do romantic and that is the main reason why they should encourage intermarriage between the two communities.

According to her statement, she stated that the handshake deal created harmony between the Kenyan people and that is the main reason why she should be married again to a Luo guy.

She created a humor causing the crowd to burst to laughter as she stated that she would appreciate if she could get Orengo, Junet or Mbadi to take her away to Nyanza. 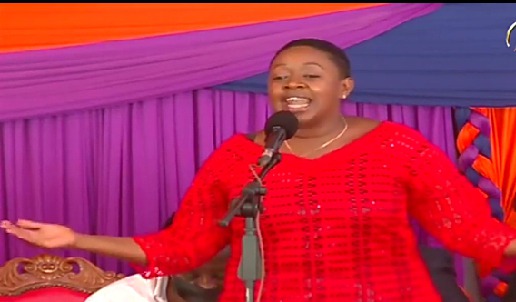 Her statement was echoed by Suba South Member of parliament who stated that if Sabina Chege will be married to a Luo guy then she will repay in return and be married by Kikuyu man. Their statement made the crowd to burst to laughter at Raila's Nyeri azimio la Umoja

ODM Responds To Wanjigi After Dragging Raila Into His Woes, Comes Clean On His Bid To Fly Its Ticket