By starlightstudio (self media writer) | 11 months ago 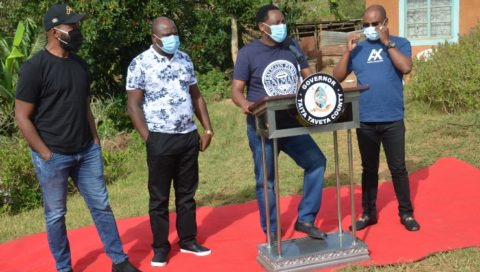 Taita Taveta Governor Granton Samboja has been appointed the chairperson of the Coast economic bloc, Jumuiya ya Kaunti za Pwani (JKP) for a two-year term from 2021 to 2023.

The announcement was made at a meeting at Samboja’s home at Mwakishimba village in Wundanyi Sub County on Wednesday, February 10.

Mvurya has been the chairperson for JKP since 2019. Speaking after the nomination, Governor Samboja thanked his counterparts and promised to steer the bloc towards economic prosperity.

He further stated that he will strive to revive all the stalled projects to make sure that residents of Coast region benefited from the bloc.

He asks Senate to compel KWS to share parks revenue with his county. He vows no let-up in push to dissolve county

“I am delighted to accept this appointment for the next two years and promise to work with all leaders,” he said.

During the meeting, the Chief Executive Officer (CEO) of the secretariat Emmanuel Nzai gave the governors a detailed status of the projects and progress of the bloc.

One of the biggest projects undertaken by the bloc is construction of a cashew factory that seeks to empower thousands of farmers in the six counties.

Mahesh Patel, chair for Empowering Farmers Foundation (EFF), gave a roadmap for the revival of cashew nut sector in the region.

Korosho ni Maisha Project intends to bring down poverty margins amongst the rural communities and improve lives of over 350,000 farmers across the coast region.

The initiative aims to increase annual cashew nut production to over 300,000 metric tons that will see the bloc earn revenue of Sh. 40 billion annually in the next 10 years.

Governor Samboja further stated that Coast region would not sit in the sidelines in matters of national politics. He stated that the region had always supported other candidates to vie for presidency and said it was time for other regions to support a candidate from the region.

“It is time to receive reciprocity for all the times we have supported candidates from other regions,” he said. None of the other governors talked during the press briefing.

Atwoli Trashes Mudavadi, Wetang'ula As He Reacts To His Relative Joining Ruto's Camp