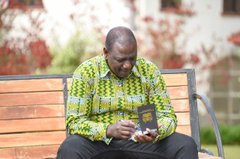 It's less than 10 months to next year's general election when over 20 million kenyans will be headed to the Polls to choose new leaders.

The presidential race is likely to be a two horse race between Deputy president William Ruto and ODM leader Raila Odinga who seems to enjoy the president's Support.

The two frontliners have huge followings in their Political backyards to the extent that any rebel rarely survives the political waves they generate.

Such is the case in rift valley where the deputy president William Ruto has a near fanatical following.

The UDA wave generated by the DP has started having effects on the ground as those previously opposed to him start hinting at working with him.

Some rebels are now fully embracing Ruto's party of choice UDA following what they call advise from their supporters in a special Damascus moment.

Nandi hills MP Alfred keter who has been a critic of Ruto for sometimes now haa declared his unwavering Support for the DP blaming his enemies for planting seeds of discord between him and Ruto.

"I have nothing personal against the DP and I will compaign for him to win the presidency, my political detractors created imaginary differences", he said as quoted by the daily nation.

Another Mp that has seen the light is ainabkoi's William chepkut who was elected as an independent candidate but has been working with KANU's Gideon Moi.

Chepkut has now dumped Moi following what he termed as advise from his Supporters to join UDA.

"I cannot go aggainst the wishes of my employers, some people have been peddling lies against me but let it be known today that I will defend my seat on UDA ticket", he said.

Another of Ruto's critic cheranganyi MP Joshua kutuny who is the jubilee deputy Secretary general has taken a low profile from jubilee affairs.

Speaking to the media, he however denied having taken a low profile saying that the jubilee Secretariat led by SG Raphael Tuju is well able to articulate the issues of the party at the national level.

"Jubilee has an efficient and energetic Secretariate we agreed that the Sg should Handle the day to day activities of the party", he told the daily nation.

Ruto allies led by Kapseret MP Oscar Sudi have already warned those who don't support the DP to prepare for humiliating defeats as they risk Political Oblivion.

Should people elect leaders based on parties? Feel free to share your thoughts and comments on this on our comments platform 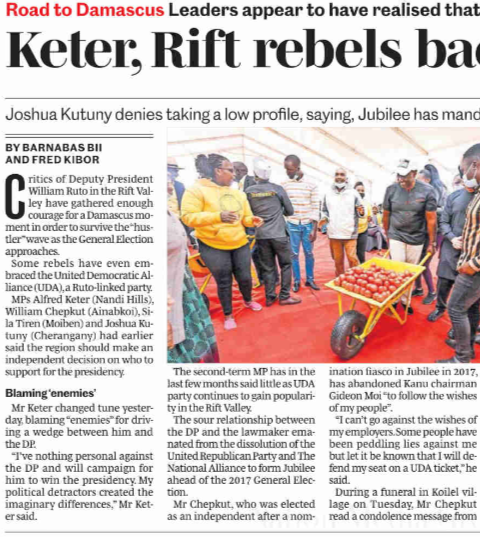