Interior Cabinet Secretary; Fred Matiang’i has unveiled that he has received a couple of intelligence reports as the CS showing that the popularity of the ODM leader, Raila Odinga has unceasingly been on the rise. 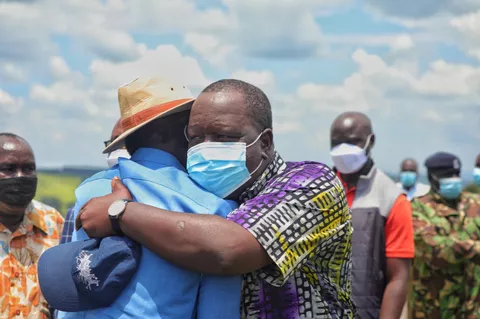 Talking at Mwongori High School during the learning institution’s fundraiser function, Matiang’i pointed that he had gotten reports which indicated that Odinga will form the government after the August 9, 2022 general elections.

The vocal cabinet secretary stated that after looking at the reports it was apparent that a good number of Kenyans cheered the March 9, 2018 handshake between Raila and President Uhuru Kenyatta.

He also sought consent from his community to back up the former premier arguing that Uhuru was working closely with the ODM leader and he believes Odinga will form the next government once Kenyatta's reign ends.

The CS was of the opinion that the Abagusii family should be in government after the 2022 elections and warned that if they take the other route, they will be in opposition and miss out on key opportunities.

“I have sealed a covenant with these people from my home and I have told them publicly that I will be where you and the President are. It is not wise to engage in things that are silly at the expense of these people,” Matiang’i stated.

He also castigated area leaders who have been party hopping and urged them to take a stance and back up one candidate if they want to garner votes from the citizens.

The coveted CS praised President Uhuru whom he said trusted him with the various positions since 2013 when he got to the first term of power.

In September 2021, Matiang’i hinted that the head of state and Odinga were the ones who drove him to join active politics. Mr. Fred said he had elucidate plans to ensure that he is part and parcel of the next government.

“Uhuru and Raila are training me to succeed them,” Matiang’i told the residents.

The CS mentioned that Kenyatta and Raila’s roles in determining who becomes the fifth president cannot be ignored and that he was keenly following in their political footsteps.

Matiang’i mentioned that the Gusii community needs to be tactical so as to be in the country’s leadership after the forthcoming polls.