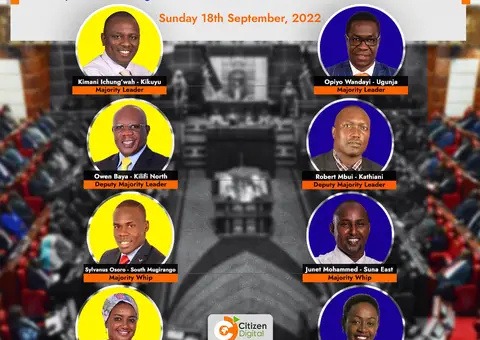 In the past few days, there has been confusion on which party has majority of the members of parliament, the Kenya Kwanza Alliance is claiming to have the most members in the house with the Azimio One Kenya Alliance claiming the same.

The contest for majority in the national assembly has seen the Azimio coalition nominate Ugenya MP Opiyo Wundanyi as the leader of majority, he will be deputized by Kathiani MP Robert Mbui. Junet Mohammed will be the majority whip helped by Sabina Chege.

The Kenya Kwanza side settled on Kikuyu MP Kimani Inchungwah as the leader of majority and he will be deputized by Owen Baya of Kilifi North constituency. South Mugirango member of parliament Sylvanus Osoro will be the majority whip in the national assembly.

As the majority dispute in the house continues, all eyes are set on the national assembly speaker Moses Wetangula who will determine which side has the majority. 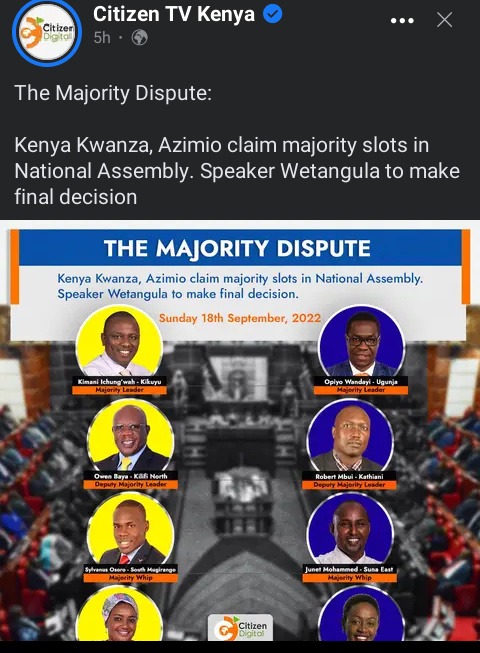 Several Passengers Escape Death By A Whisker As Matatu Rolls Along Meru-Embu Highway.

Powerful CS who accompanied President Ruto to South Sudan today in his One day State Visit.

Another Accident In Meru Reported On The Same Highway Where 3 Died In The Morning, Netizens React