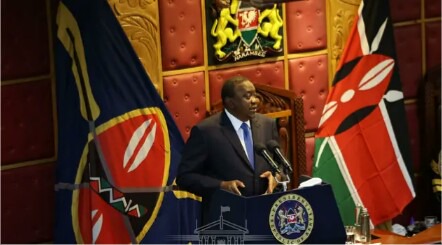 President Kenyatta attacked his deputy president, William Ruto, during his state of the nation address, claiming that he is the stumbling block to his development agenda.

Since his handshake deal with former Prime Minister Raila Amollo Odinga, President Kenyatta claims that the state of the Kenyan economy has improved in recent years.

The president stated during his address at the parliament building that the Kenyan economy has grown by over 2% since his handshake agreement, and he urged Kenyans to continue supporting the former prime minister in his unity efforts.

During his speech, President Kenyatta also revealed that he has set aside sufficient funds to hire more teachers in order to address the teacher shortage.

Do you think Raila Odinga handshake with uhuru has helped the country in any way?

Powerful Life Principles We Can Learn From The Eagle.

Why Kenya Has Always Been A Target For Al Shabaab Attack