By Troyfix | self meida writer
Published 1 months ago - 2406 views

After the abrupt death of the late Machakos senator Boniface Kabaka in december.I.E.BC has set the election date on the 23rd this march.The late senator was from Chama cha Uzalendo party.Politicians from three main parties mainy Wiper,UDA,Maendeleo Chap Chap are going gloves - off each party testing its popularity mainly former vice president Kalonzo Musyoka and Governor Alfred Mutua who both are vying for president in next year general elections. 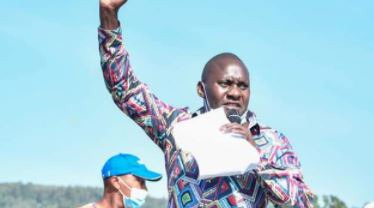 She is the ex -wife of former Machakos Senator Johnson Muthama.She is not new to politics and had previously contested the Machakos women representative seat under the banner of Jubilee the ruling party but lost to Joyce Kamene from the wiper party the party she is contesting under it's banner.She was also in the team building bridges initiative appointed by the president Uhuru Kenyatta and former Prime Minister Raila Odinga. Wiper nominating Agnes Kavindu has been thought by many to be renvenge to Former Senator Johnson Muthama by the party for dichtching the party and not backing former vice preident Kalonzo Musyoka in his presidential bid 2022.

Youthful leader who has not shy away from politics even after failling to clinch seat for the Mwala member of parliament four times.This time his vying under the new UDA party asossiated with the deputy president and his presidential bid 2022.The former senator of Machakos Johnson Muthama is acting interim Chairman.

Former minister of water serving under president Kibaki goverment and has also as member of parliament representing Mwala two times.Mutua Katuku is vying under the Mandeleo Chap Chap banner for his senatorial bid and is assosiated with Governor Alfred Mutua and his presidential bid for 2022.This is a great show down of power before the election next year as president Uhuru is serving his final term.

Content created and supplied by: Troyfix (via Opera News )

Agnes Kavindu Muthama Machakos Maendeleo Chap Chap Mutua Katuku Wiper
Opera News is a free to use platform and the views and opinions expressed herein are solely those of the author and do not represent, reflect or express the views of Opera News. Any/all written content and images displayed are provided by the blogger/author, appear herein as submitted by the blogger/author and are unedited by Opera News. Opera News does not consent to nor does it condone the posting of any content that violates the rights (including the copyrights) of any third party, nor content that may malign, inter alia, any religion, ethnic group, organization, gender, company, or individual. Opera News furthermore does not condone the use of our platform for the purposes encouraging/endorsing hate speech, violation of human rights and/or utterances of a defamatory nature. If the content contained herein violates any of your rights, including those of copyright, and/or violates any the above mentioned factors, you are requested to immediately notify us using via the following email address operanews-external(at)opera.com and/or report the article using the available reporting functionality built into our Platform