By Allnewsupdates (self media writer) | 1 month ago 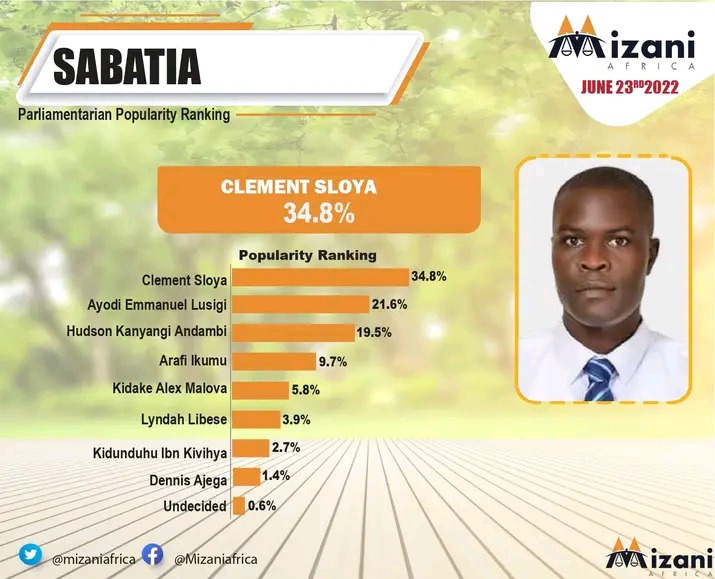 It is no doubt that Sabatia constituency will be one of the areas where DAP-KENYA will really reap big in the upcoming August 9th elections.This is attributed to the tireless energy of the dedicated DAP-K members like aspiring member of parliament Honourable Andambi.

Hon Hudson Andambi, OGW, openly declared to vie for the seat through the DAP-K party and he is positive that he will win with a big margin in August 9th.

Hudson Andambi, is a popular name which quickly gained momentum and became a household term after gaining a direct DAP-K ticket during nominations. In recent polls by Mizani Africa, he has been placed third barely weeks since he launched campaign.

His campaign to win the seat as the Sabatia Member of parliament has also netted hundreds of grassroots coordinators and other aspirants across Sub county and Vihiga County from various parties to back the DAP-K party that is under Azimio Umbrella.

Mizani Africa placed the vibrant politician third in polls conducted in the Sub county after Clement Sloya and Dr. Ayodi. He garnered a total of 19.5% in the poll done recently.

Andambi can boast of being very vocal in the sub county as at the moment.

This has send fears to the opponents on his sudden rise in the political arena.

He has on several occasions assured Sabatia residents that he will continue coming up with laws and ways that will target to improve the lives of the Sabatian residents.

Andambi has also assured the downtrodden that he will not fail them at all if elected the member of parliament.

He has also come out to spell out his agenda in the Parliamentary race, a thing that the other candidates have not done yet.

Content created and supplied by: Allnewsupdates (via Opera News )

"It's not Done Till It's Done, " Martha Karua Breaks Silenc As Presidential Vote Tallying Continues