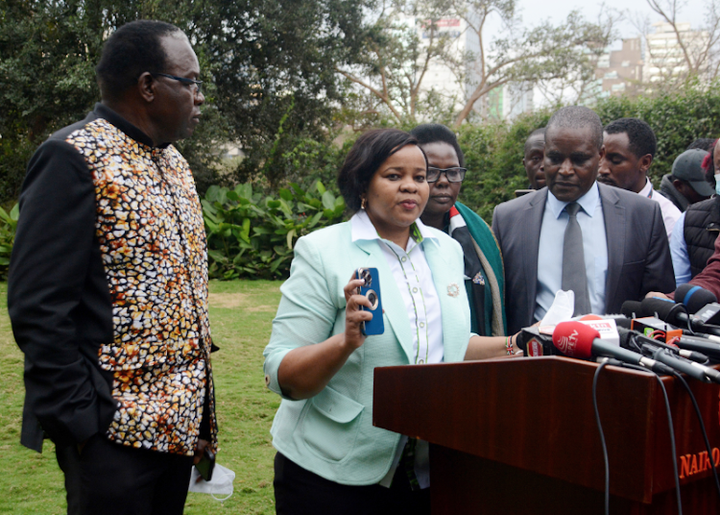 The four commissioners of the IEBC who disapproved of Monday's presidential results have explained their reasoning. In a statement delivered to the press by chairperson Juliana Cherera on Tuesday at Serena Hotel, the commissioners declared that adding up the percentages of the results was a mathematical folly that defied sense.

Reports indicated that the total percentage of votes cast for all four presidential contenders was greater than 100%.

"Adding it all up yields a result of 100.01 percent." This is equivalent to over 142,000 votes, which will have a major impact on the final tally. " This is what Cherera said.

After saying, "When we urged that we verify the findings, the chairman refused and persisted on declaring and releasing the results," she clarified that the results had not been checked. To put that in perspective, 0.01 percent of the votes cast is equivalent to about 1,400 votes.

The commissioners went on to say that they didn't feel comfortable claiming credit for the findings because they revealed information on the total number of registered voters, votes cast, and rejected ballots. They said this action was illegal and in violation of the Constitution.

"There is no need to prove that the percent is not a fraction of the whole; everyone understands that it is." For example, if there were 7.17 million legitimate votes cast in favor of the winning candidate, that would be equal to 50.49 percent. " Asked Cherera.

Irene Masit, Justus Nyangaya, and Francis Wanderi, three other commissioners, stood beside her.

"The question is whether the figures of the 34 and the 39 respectively formed the independent variable to support the 25% in 34 counties and 25% in the 39% for Raila and Ruto respectively," Cherera added.