Azimio La Umoja's presidential running mate and NARC leader, honorable Martha Karua has down played an incident that happened today in Kisii After her rally was allegedly disrupted for unknown reasons. 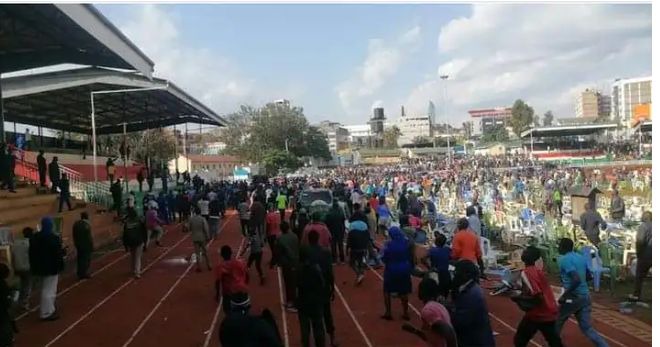 According to the reports given by a reliable source of information, it has been revealed that the rally was allegedly Disrupted after an unknown person allegedly threw tear gas cannister in the Podium where Martha Karua along with the wife of the former prime Minister of Kenya were allegedly sitted.

This is happening at the same time when the deputy president of Kenya, honorable William Ruto has congratulated the former prime Minister of Kenya and Orange Democratic Movement party leader, honorable Raila Odinga who revealed that he was going to go home if he is defeated in the oncoming General elections.

According to the reports given by the former prime Minister of Kenya, he claimed that he was going to congratulate the Winner and go home if he is defeated in the oncoming General elections which is supposed to be held in a few months time.

While reacting to this incident, kenyans who took to their different social media accounts to express their opinions and suggestions on the matter have called upon the DCIs and the Police to conduct an investigation in order to find out why the tear has was thrown.

According to the reports given by most Kenyans, they claimed that it was so unfortunate that the government is yet to do something about these kind of incidents despite the fact that people might end up getting hurt.