Ruling president in opposition; Uhuru At Kasarani for ODM NDC in a rare show of unity

By COLLINSCHEP (self media writer) | 3 months ago 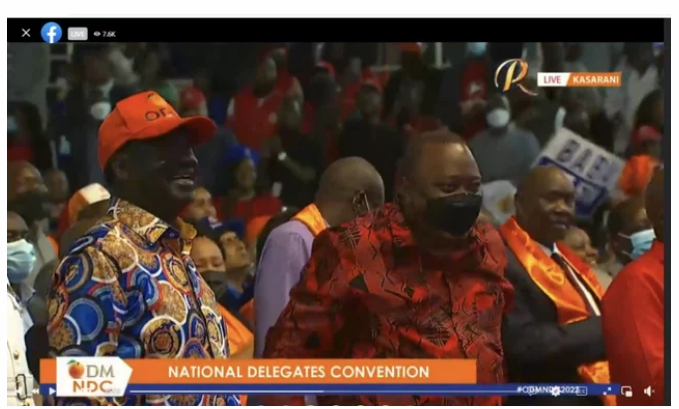 The two leaders arrived together after Jubilee’s similar meeting at the KICC.

Raila had earlier attended his NDC in Kasarani before he left to join Kenyatta at his Jubilee NDC, a rare show of unity for the two political leaders who have worked together since March 2018 when they shook hands to end enemity that accelerated after Kenyatta defeated Odinga in a presidential election.

During the Jubilee NDC at KICC, President Uhuru Kenyatta announced the formation of the Azimio-One Kenya Alliance Coalition which will field a joint presidential candidate.

The coalition brings together Jubilee, ODM, One Kenya Alliance (OKA) principals Kalonzo Musyoka of Wiper, Gideon Moi of KANU, Charity Ngilu of Narc among others.

“We are unveiling Azimio One Kenya Alliance and we will defeat them (rivals led by his Deputy William Ruto),” Kenyatta told the meeting.

Jubilee and ODM have already signed cooperating agreements with various parties which will all be under the new coalition.

Content created and supplied by: COLLINSCHEP (via Opera News )

Opinion: Media Should Be Fair In Their Coverage of Raila And Ruto

"The Ground in the Mountain has Shifted" Key Odinga Ally Alleges, Names Most Preferred Candidate

Makau Mutua Observe What Is Happening In Mt Kenya Region In Raila's Favour, Tells Kenyans About It