Jubilee Makes A Major Announcement Concerning The Removal Of Rafael Tuju And Murathe, Says This

By NewsAlertKE (self meida writer) | 2 months

Soon after the Jubilee's loss in the Kiambaa by-elections, the top officials inside this party have been passing through some hard times. These officials are hon Rafael Tuju and the vice chairman, hon David Murathe where Uhuru's allies threatened to remove them from their positions in the party. According to these allies, Murathe and Rafael Tuju are the one who caused this failure. Now, today, the Jubilee party has come out to make a major announcement concerning the alleged removal of these two officials. As reported by the Kenyans.co.ke, Jubilee party through their deputy secretary general, hon Josua Kutuny have said that they have resolved to retain these two leaders as their top officials. This means that Tuju and Murathe will not be removed from the party. Kutuny concluded by saying that the party is very intact. 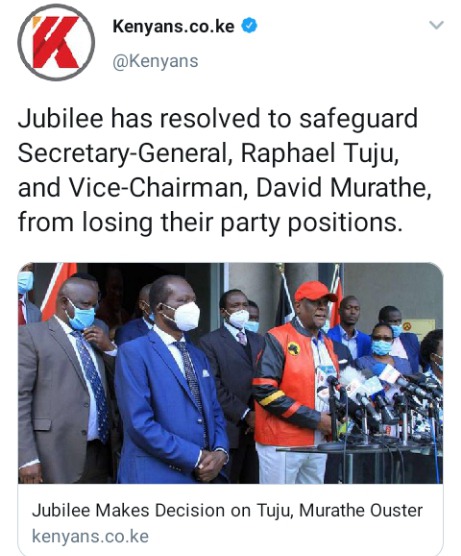 "The party's Deputy Secretary General, Joshua Kutuny - on Saturday, July 24 - announced that Tuju and Murathe would retain their roles as the party realigns and rebrands. Eldas MP Adan Keynan added that the duo will play a key role in Jubilee's future which included conducting grassroots elections to enrol new members to spruce up the party." Said the Kenyans.co.ke.

Major Division In Western Region As Karua And Kibwana Officiate The Endorsement Of Dr. Kituyi

Kirinyaga Race: Bad News To Waiguru As Latest Opinion Poll Places Her Behind Karua And Ngirici

"Give Us A break," Cate Waruguru Boldly Lectures Martha Karua And Other Mt Kenya Leaders[Details]

At The Peak Of Forming a Coalition? Powerful Leader Joins Mukhisa Kituyi's Endorsement At His Home

Have You Recieved Your Huduma Card? Do the Following To Know If It's Status