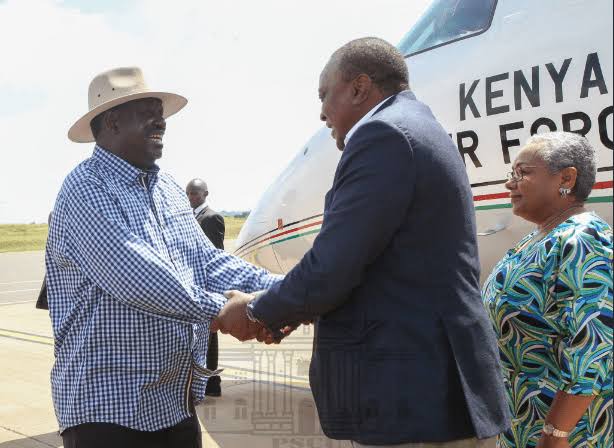 It has emerged that the Kenyan Head of State president Uhuru Kenyatta will be headed to his Mt Kenya backyard in an offensive mission of clipping his deputy the support that he has been receiving from the area.

He will also be seeking to make sure that the former Prime Minister Raila Amollo Odinga is accepted by the region and the two will be addressing the residents in some select areas in the Central Kenya region.

This is great win fir Raila Odinga who has been trying to woo the Mt Kenya region to support him since he has been in good relationship with their Kingpin the Head of State president Uhuru Kenyatta.

In the Sagana three meeting, the Head of State will meet leaders who support both the former Prime Minister and himself with an aim of crafting a way forward on how the top tours will be conducted in the coming days.

This has been confirmed by the Jubilee party Deputy chairperson David Murathe who noted that the meetings will boost the support that Raila Odinga has been having in the central Kenya region.

“Yes, we will have Sagana 3 early next month,” Murathe told the Star, a day after announcing that Jubilee and ODM will hold a joint meeting at Nyayo National Stadium to endorse Raila.