By AdembaAllans (self media writer) | 1 month ago

Nairobi gubernatorial aspirant under the Jubilee party ticket Polycarp Igathe has been declared eligible to vie for the governor seat. The IEBC Dispute and Resolution Committee declared Igathe after an affidavit filled by George Bush, a Nairobi voter failed in court today. 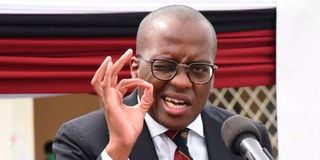 The complainant George Bush claimed that Mr. Igathe's nomination should be revoked on ground that Igathe abdicated his role as deputy governor when he resigned as Nairobi Deputy Governor after fallout with the former governor Mike Sonko on January 31st 2018.

George Bush says that resigning from the office is a decision that Mr Igathe should have consulted Nairobi voters and that failing to execute his duties is a misconduct. Mr. Bush however urged the CROs to consider his letter. The task force however found the complains baseless before declaring them null. This leaves Mr. Igathe in one horse race just few hours after his nemesis Johnson Sakaja's certificate got revoked by Commission of University Education.

UDA's senatorial aspirant Karungo Wa Thangwa also faced the same charges in Kiambu. Karungo, through his lawyer Mbugwa Ng'ang'a challenged the decision by IEBC Kiambu county Returning Officer not allowing him to vie after presenting his papers late. Mr. Karungo also faced complains for being impeached by Kiambu County Assembly for incompetency and abuse of office. The ruling of the case will be on 18th of June. The case continues on Tuesday next week.

Content created and supplied by: AdembaAllans (via Opera News )

Provisional Results On Thursday 8:10 am

Update On presidential Results As At 7:00 Am On August 11th

Provisional Presidential Results For Nairobi County as at 7:30 AM