By AngelMbuthia (self meida writer) | 23 days

Jubilee party candidate in Bonchari Parliamentary seat Hon Zebedeo Opore has brought businesses to a standstill in Riana Ward, Bonchari constituency after he made a stopover at Iyabe market to address his supporters.

While in company with the Jubilee Party members from Gusii land including Hon Douglas Ogari who pulled out from the race under KANU party ticket, Hon Opore has pulled a mammoth crowd of his supporters at Iyabe Market, Riana Ward where he had attended an SDA church service.

A mammoth crowd of Jubilee supporters flooded Iyabe market blocking Hon Pavel Oimeke as they demanded him to address them ahead of the upcoming by-election which is slated on 18th May 2021.

Hon Opore urged the Riana Ward residents to vote for him in the upcoming by-election so that he can use the parliamentary seat to diligently channel development agendas to the people of Bonchari and finish all the pending projects that had been started by the late MP Hon Oroo Oyioka. 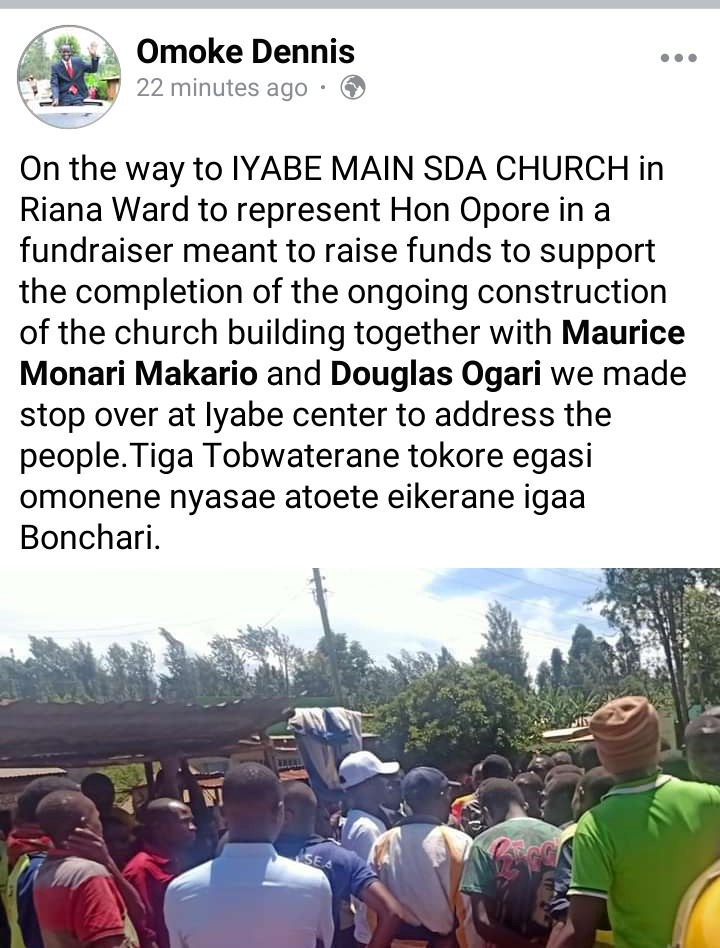 This comes hours after the ODM party leader Raila Odinga refuted speculations that had been going rounds on social media alleging of ODM party to withdraw its candidate from the Bonchari Parliamentary seat in favour of a Jubilee candidate.

On Saturday Morning, the former prime minister Raila Odinga reaffirmed the ODM supporters that their candidate Hon Pavel Oimeke will be in the ballot for the Bonchari Parliamentary seat by-election despite umpteenth pledge from Uhuru's camp to withdraw his (Raila) candidate.

Bonchari Parliamentary seat has attracted 13 potential candidates each eyeing to replace the late MP Oroo Oyioka who died while undergoing treatment at Aga Hospital In Kisumu.

Who do you think will carry the day?

Remember The Boys' School Whose Students Sneaked To A Girls' School, This Is How KCSE Candidates Performed

Candidate From The Slums of Kiandutu in Thika Defies Odds, Posts Impressive Results in KCSE

Kenyans React as Rev. Natasha Shares These Photos of Ladies in the Hostess Department in her Church

Third Term Closing Date For All Schools In Kenya.

Why KCSE 2020 Students Are Going To Benefit Hugely After The This Statement Was Issued.