Orange Democratic Movement party popularity in the Kisii region has continued growing especially after the party successfully won the Bonchari parliamentary seat that was previously occupied by Jubilee party. 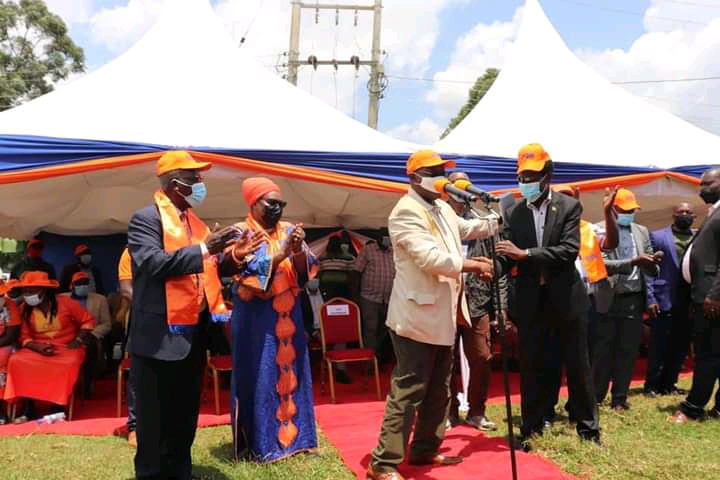 With the strategies being put in place by Kisii county governor James Ongwae, senator Professor Sam Ongeri, and women representative Janet Ongera, the party is turning the region orange with new offices being opened and defectors from rival parties recieved.

The latest people to join the former prime minister's party are six members of county assembly from other parties. They joined the party as the trio led intensive party registration in the region.

The lawmakers include: Dennis Ombachi of Marami ward and Samwel Ngisa of Bogetenga ward both who were elected on PDP, Vincent Moisab and John Amisi of Kalonzo's Wiper, the two others are Samwel Onuko, and Ismael Matundura who were elected on independent tickets.

While decamping, they promised to help campaign for Raila whose is keen to succeed president Uhuru Kenyatta. They will likely defend their various seats on the ODM party.

This is a boost for Raila who is keen on keeping his backyard safe from intruders including deputy president William Ruto who is slowly making inroads. 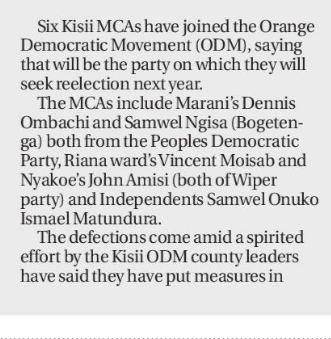 Saturday Newspaper: Uhuru To Reveal Why He Fell Out With Ruto And Why Raila Is The Choice

Kabogo's Advice to Uhuru Kenyatta Ahead Of 2022 Polls

You are Perfect and No One Can Beat You In That; Bobi Wine's Lastborn Tells Him

Saturday 22nd: The Standard, The Daily Nation And The Star Newspapers Headline Review