Basing on the Mashujaa Day Celebrations that is expected to take place on 20th October, the function is to be held in Kirinyaga County at Waruguru Stadium. Governor Anne Waiguru is expected to host the anniversary in that she is the host governor. 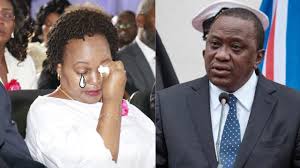 According to different sources, it has been made clear that, the deep state led by the Interior Permanent Secretary Karanja Kibicho, have kept the host governor out of play, locking her out of the preparations for the big Heroes Day.

Waiguru speaking revealed that she has no say on who would attend the Mashujaa Day Celebrations despite being the host.

"I have no say at all as the host. They said the county commissioner is the one who is running the show,” Waiguru revealed.

From sources, the reason behind the governor being sidelined is because of her act of ditching Jubilee and joining Ruto's UDA. She also withdrew her support for handshake and joined the Hustlers' movement which opposed the BBI initative that was declared null and void by the Court.