By SiasaKAKAMEGA (self media writer) | 2 months ago

The former Western and Nyanza provinces have primarily formed one voting block. The 2022 political dynamics, however, seem to strike heavily into this voting block with the Principals in the area pulling totally different strings. This change in the geopolitical wind has become so intense to an extend of affecting the local races, those of governors forming a classical example. Below are some of the races one would be keen to watch:

According to the 2017 voter register published by the IEBC, this county boasts of 743,736 voters in its twelve sub-counties. The race for the top seat has shaped up leaving Amani National Congress flag bearer, Senator Cleophas Malala and Orange Democratic Movement flag bearer, FCPA Fernandez Barasa as the front runners. Former senator, Boni Khalwale and well known Savula dropped their ambitions for their coalition counter parts. As Malala banks on the Northern side of Kakamega as his strong hold, Barasa is looking forward to reap big from the southern subcounties of Butere, Mumias East and West and his home subcounty of Matungu. Fernandez enjoys the support from Azimio coalition as Malala commands Kenya Kwanza's support. Kakamega continues to appear as a tuff battle ground for both coalition and that makes this race even more interesting to keep an eye on.

(Senator Cleophas Malala in past political event in Mumias)

ODM has primarily been the party of choice in Luo Nyanza for contesting elective political seats. This has been the case until when the former Nairobi governor joined the Homabay race for the top seat. After his failed attempt to clinch the ODM party ticket, Dr. Evans Kidero opted to run as an independent candidate. Kidero, who has proved beyond doubt to have enough resources to finance a spirited campaign across the 1062 polling centers, will face off with ODM's Gladys Wanga. ODM members, including the chairman(John Mbadi) who comes from the same region will be keen to save themselves an embarrassment of not winning the seat. Another heavy weight who has shown interest in the race is Migori's governor, Okoth Obado. Obado's relationship with Raila has deteriorated over the past few years due to his unrelenting support for Kenya Kwanza and him joining the race must be to the disadvantage of ODM. 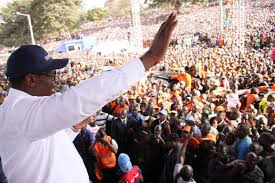 (Dr. Evans Kidero in a past campaign rally, photo courtesy)

Of the two races, the final judgement remains the voter. What do you think? Can Kidero triumph against ODM in Homabay? Will the first time Barasa send Cleo Malala to political oblivion in Kakamega county? What other races would you wish to know about? Share your thoughts in the comments section.

Content created and supplied by: SiasaKAKAMEGA (via Opera News )