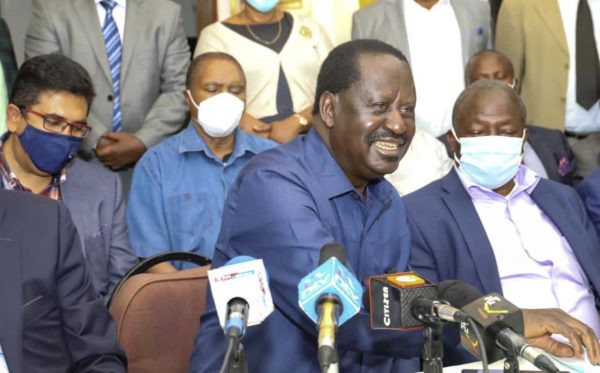 Photo: Raila Odinga in a past event. (image credit/ TV47)

A day after his rally in Eldoret which had a stunningly huge turnout, Raila Odinga was on Saturday in Isiolo popularizing his 'Azimio La Umoja.' The former Prime Minister is, however, yet to announce his presidential bid though there is no doubt he will eventually do not later than this year.

Today, the former Prime Minister's rally in Isiolo was briefly disrupted by the forces of nature, based on the short video shared online by lawyer AhmedNassir Abdullahi.

According to the lawyer, though the residents turned out to welcome ODM leader, Sandstorm engulfed the place before Mr Odinga could speak.

"The people can keep the peace but at times nature has its own designs...see how sandstorm engulfed Hon Raila's rally in Isiolo and literally sends everyone to the four winds! @makaumutua @WehliyeMohamed @DonaldBKipkorir," lawyer Ahmed Nassir noted in his Twitter Handle.

You can watch the whole video here. According to IEBC, elections will be held in August 2022. And with less than 12 months remaining, different politicians have began realigning themselves on favorable political parties and visiting different places in search of votes. As Raila was in Isiolo, Ruto was on Nyali constituency drumming support for his presidential bid.

Mary Wambui, Billionare Who Has Been On The Run Finally Surrenders To Court