Jubilee vice chairperson, and close aide of Uhuru Kenyatta, David Murathe, has urged Kenyans not to vote in Deputy President William Ruto as the next Head of State arguing that Ruto's government might be the worst regime ever experienced in the history of this country. 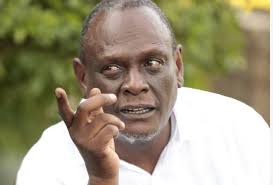 Speaking during an interview with K24 TV, David Murathe, who is campaigning for Raila Amollo Odinga to succeed Uhuru Kenyatta, pointed out five dangerous decisions Ruto may make if given power, alleging that those decisons might kill democracy and bring impunity in this nation.

He first urged that the DP William Ruto is full of anger and would rule with an iron fist. Murathe, cited the leaked audio as a reference in which Ruto was recorded allegedly threatening to slap his boss for almost quitting to participate in repeat election.

“ William Ruto had the audacity to slap a Reuben Chesire, who was a Minister and old enough to be his father during the late President Daniel arap Moi regime. He also said he was going to slap Uhuru Kenyatta and said he has no apologies for it. If such a thought can cross his mind, it tells you what kind of a person you are dealing with." Murathe posed.

Secondly, Murathe claimed that Ruto would be an unapologetic President, one who will no take a glimpse on his thoughts, but stamp his authority and achieve his agenda using all means.

He also pointed out at Ruto's desire to slap Uhuru in 2017 as a clear indication of his personality and character. Dp was against Uhuru's idea of relinquishing power, thus painting him as a weak leader rather than a diplomat, who seeks peace than personal interest.

Taking swipe at DP, Murathe urged that Ruto would change the Constitution to suit his own political reasons and would not relinquish power if he ever succeeded President Uhuru Kenyatta in the upcoming General elections. Saying that Dp is a vindictive leader and someone who would die for power.

And since he leads the outfit that has millions of supporters as Kenya Kwanza Co-principal, Murathe now claims it would be a litmus test for DP's decision making skills. He urged Kenyans to observe Ruto's first resolution in case he loses August polls, which will give Kenyans a glimpse of Ruto's real character.

What is your opinions concerning Murathe's allegations against Dp William Ruto? Drop your comments below.