Uhuru Muigai Kenyatta is a Kenyan politician and the current president of Kenya. He served as the member of parliament for Gatundu South from 2002 to 2013. He also served as Deputy Prime Minister from 2007 to 2013. Currently, he is a member and the party leader of the Jubilee Party of Kenya.

Different leaders have formed a habit of insulting him with his family and belittling every project associated to him. They fail to understand that even though he hasn't achieved what he promised Kenyans, the solution is not found on insults, dirty talks or even disrespecting the God ordained Leader. Like any other family man our President deserves all the respect that goes along with that.

This kind of habit has been glorified by his opposers forgetting that what goes round comes round and politics is a 'dirty game'. Other leaders of goodwill and those who love their peace have always been seen and heard condemning that habit using the strongest terms possible.

Among them is a youthful CAS-Education who never gives room or tolerates such kind of bad morals in our society. Zack Kînûthia is the current CAS-Education. 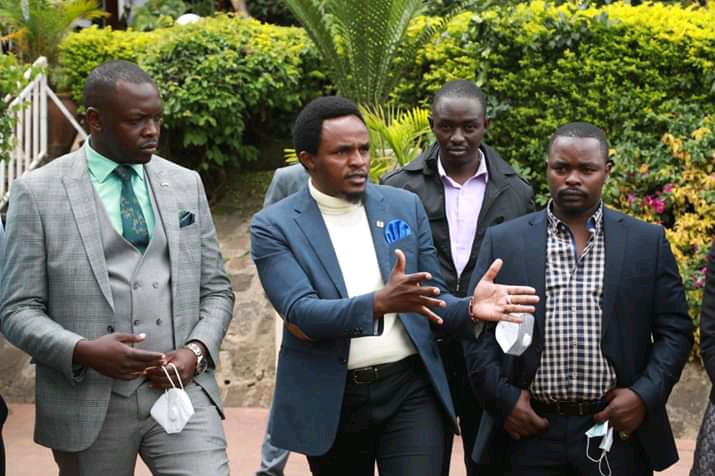 He always advocates for unity, peace and unity amongst all Kenyans. He took to his facebook page a very strong message towards all those who have formed a habit of insulting others in the name of popularising themselves.

His post welcomed different views but the message was well delivered. This was the youthful CAS message that he had posted on social media.

I have had no time until this evening, to listen to some sentiments which were expressed in Msambweni during the Thanksgiving of the MP newly elected, Hon Faisal.

It is disgusting to think that every time any person has personal failures can only vent by attacking President Kenyatta and / or his family. It's uncouth and at best, an act of bigotry.

Let me respond as a supporter of the Man in the President as follows, in the words of a famous Philosopher, Bertrand Russells.

The message goes to the so called TangaTanga legion.

Nothing can be more hopeless than a population of disillusioned bigots, who have lost the capacity to be rational, and have no longer any outlet but despair for their irrationality. Such a population has no power of self-direction, and little willingness to accept again the kind of direction from without which has been found to lead astray. The springs of action are dried up, and nothing remains but listless drifting. This is part of the price that has to be paid for indulgence in collective hysteria.

The wonderful powerful message from the Youthful CAS attracted comments and here is how the comments were. Note as you read through that from almost 200 comments, no one supported the CAS message but rather they all criticized him severely without shying off. 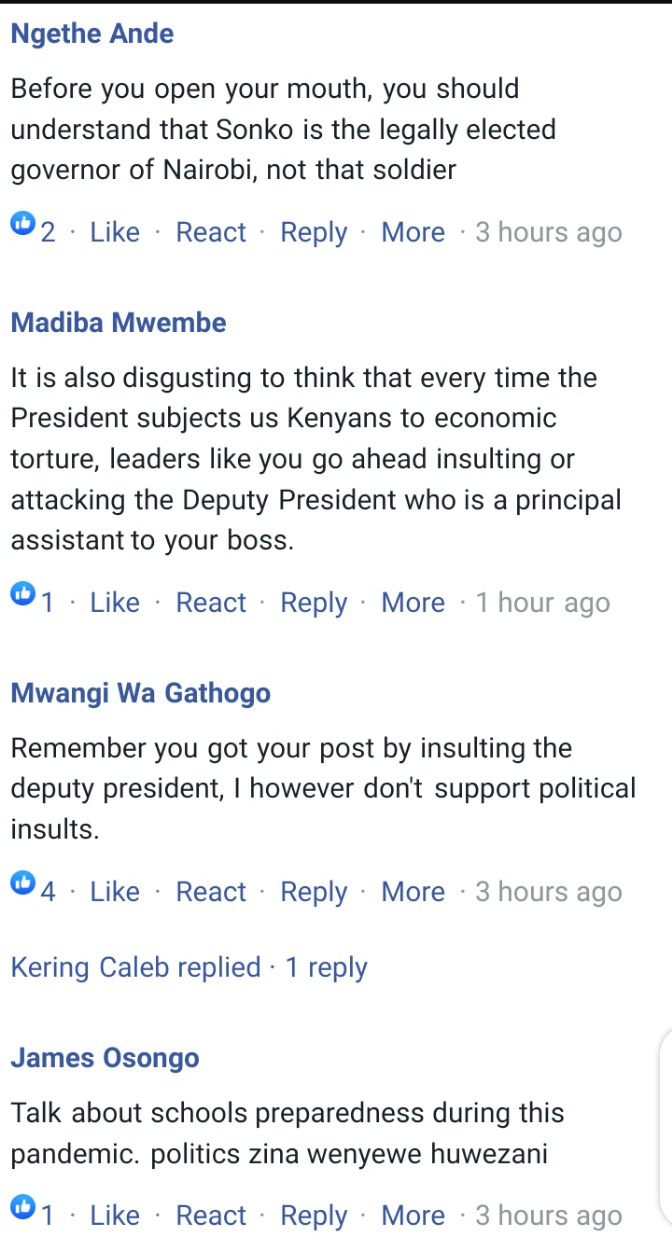 *Uhuru had access to your posts where you attacked Ruto constantly but he nevertheless appointed you a CAS. It's either he liked what you were doing or you were doing his bidding.

*Before you open your mouth, you should understand that Sonko is the legally elected governor of Nairobi, not that soldier.

*It is also disgusting to think that every time the President subjects us Kenyans to economic torture, leaders like you go ahead insulting or attacking the Deputy President who is a principal assistant to your boss.

*Remember you got your post by insulting the deputy president, I however don't support political insults.

*The position you hold now was midwifed by your insults to the Deputy President. Shut up.

*That is the same thing Jubilee did to get to power, punching Raila and Odm calling him mganga. That is what politics is all about, atleast Kenyan politics. However you hammer Uhuru, Raila will be in power in 2022.

*You were not elected by anybody. You are the result of Ruto rigorous campaigned that led to you appointed as CAS. Uhuru Kenyatta is docile and unpopular among the citizens. Support at your own peril. His govt with Raila is beyond repair at the moment.

*Says the person who got his position courtesy of abusing the Deputy president.

*Instead of addressing the turmoil Children are about to undergo on the verge of schools reopening, uko hapa unareply what was said in political rallies. Behave like your fellow CASs Bwana.

*A good example of a person described by Bertrand Russell is you. Fantasized money, following Uhuru blindly as he takes the country to dogs, more borrowing and more taxation, only for recurrent expenditure and misplaced priorities like Burning bridges initiative, your are instead of telling us plans that you have put education ministry to curb spread of covid in schools as mass reopening start on Monday! Go to hell.

*This year tuko ground, we must tell people the whole truth, Uhuru Kenyatta is not the source of their problems. The Kenyan economy has been sucked to its deathbed by the very people pretending to be poor today.

*The other day before you got the state appointment from the President, you insulted his Principal assistant, second in command, Deputy President W.S Ruto.

You have no right to lecture them on matters to do with insults or disrespecting higher office. You started this brother. You are not a lesser evil.

*You owe the position to the daily insults you consistently threw to the Dp. For your information not all philosophers were sane. Together with your Master, you have 543 days to ceremonial exit. 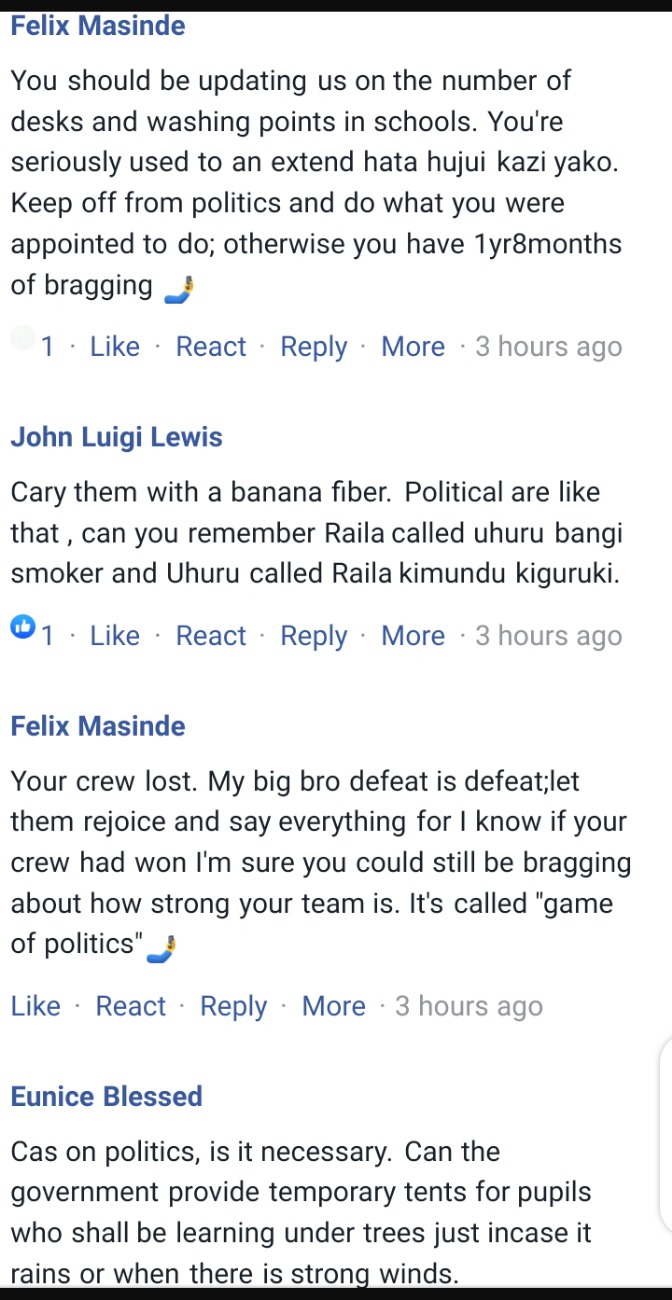 *You should be updating us on the number of desks and washing points in schools. You're seriously used to an extend you don't understand your job well. Keep off from politics and do what you were appointed to do; otherwise you have 1yr 8months of bragging.

*Your crew lost. My big bro defeat is defeat, let them rejoice and say everything for I know if your crew had won I'm sure you could still be bragging about how strong your team is. It's called "game of politics".

*CAS on politics, is it necessary? Can the Government provide temporary tents for pupils who shall be learning under trees just incase it rains or when there is strong winds.

A message that was so strong ends up with such a severe criticism from angered Kenyans. But why would people support leaders to revenge with insults? All comments seemed rubber-stamping immoral moves by our Leaders, but why now? Would you have Severely Criticized your CAS Education for posting such a message?